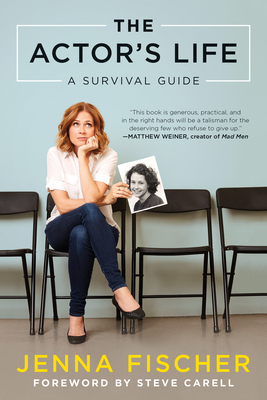 Jenna Fischer's Hollywood journey began at the age of 22 when she moved to Los Angeles from her hometown of St. Louis. With a theater degree in hand, she was determined, she was confident, she was ready to work hard. So, what could go wrong?

Uh, basically everything.  The path to being a professional actor was so much more vast and competitive than she'd imagined.  It would be eight long years before she landed her iconic role on The Office, nearly a decade of frustration, struggle, rejection and doubt.

If only she'd had a handbook for the aspiring actor. Or, better yet, someone to show her the way—an established actor who could educate her about the business, manage her expectations, and reassure her in those moments of despair.

Jenna wants to be that person for you.

With amusing candor and wit, Fischer spells out the nuts and bolts of getting established in the profession, based on her own memorable and hilarious experiences.  She tells you how to get the right headshot, what to look for in representation, and the importance of joining forces with other like-minded artists and creating your own work—invaluable advice personally acquired from her many years of struggle.  She provides helpful hints on how to be gutsy and take risks, the tricks to good auditioning and callbacks, and how not to fall for certain scams (auditions in a guy's apartment are probably not legit—or at least not for the kind of part you're looking for!).

Her inspiring, helpful guidance feels like a trusted friend who's made the journey, and has now returned to walk beside you, pointing out the pitfalls as you blaze your own path towards the life of a professional actor.

Jenna Fischer is best known for playing Pam Beesly on the acclaimed television show The Office, for which she received an Emmy nomination for Best Supporting Actress and two SAG Awards for Outstanding Performance by an Ensemble Comedy.

After wrapping The Office, Fischer went on to star in the UK/SKY B limited series You, Me and the Apocalypse along with Rob Lowe and Megan Mullally. She also starred in the Off-Broadway play Reasons to Be Happy, written and directed by Neil LaBute. Most recently, Fischer was on stage in the world premiere of Steve Martin's newest absurdist play Meteor Shower for a record-breaking run at the Old Globe Theatre.

Fischer's film credits include The Giant Mechanical Man (which she also produced), The Farrelly Brothers' comedy Hall Pass, Solitary Man, opposite Michael Douglas, Walk Hard: The Dewey Cox Story, produced by Judd Apatow, and Blades of Glory, opposite Will Ferrell.  She is upcoming in the Mike White feature Brad's Status starring Ben Stiller.

"I loved reading Jenna's honest and sincere appraisal of the actualities of breaking into, finding one's way, and then thriving in this business. I hope it is given out as a guidebook of sorts to any young actor when they land at LAX."
—Jon Hamm

"In The Actor's Life, Jenna Fischer lays out exactly what aspiring actors can expect from this crazy, unpredictable industry both practically and emotionally. Nothing is sugar-coated, nor is it cynical. It's just reality, plain and simple. At every level of success, we are all just artists trying to figure it out day by day. That's the truth."
—Christina Applegate

"If I had Jenna's book when I was a struggling actor it would have eased the pain and encouraged my journey. This is an insightful, funny, sweet story from one actor to another; we all need a leg up, a hand to hold, and the encouragement to keep going when we truly find our passion. Jenna manages to do that and more in this very helpful guide for an actor finding their way into the business."
—Julianna Margulies

"How lucky for those who dream that Jenna Fischer has written this book and candidly explained the hard work, persistence, and delusion required to become a working actor. This book is generous, practical, and in the right hands will be a talisman for the deserving few who refuse to give up."
—Matthew Weiner, creator of Mad Men

"Jenna Fischer's story is an excellent resource for anyone who is involved in the life of an actor. Much of this information was new to me; I have always respected the actor's journey, but now I am in awe of it. It's also entertaining from beginning to end."
—Allison Jones, Casting Director