No Campus for White Men: The Transformation of Higher Education into Hateful Indoctrination (Paperback) 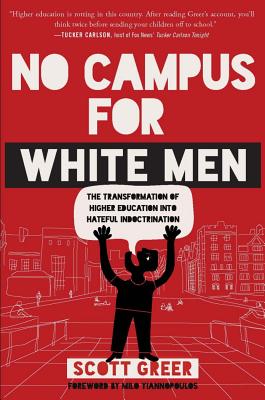 By Scott Greer, Milo Yiannopoulos (Foreword by)
This Book Is Not Sold Online - Inquire In Store
Out of Print

No Campus for White Men shines a bright light on the growing obsession with diversity, victimization and identity politics on today's college campuses, and shows how it is creating an intensely hostile and fearful atmosphere that can only lead, ultimately, to ever greater polarization in American society.

Across the country, ugly campus protests over speakers with dissenting viewpoints, as well as a preoccupation with "micro-aggressions," "trigger warnings," "safe spaces" and brand-new "gender identities," make it obvious that something has gone terribly wrong with higher education. For years, colleges have pursued policies favoring students based not on their merit, but on their race, gender, and sexual orientation. The disturbingly negative effects of this culture are now impossible to deny.

Scott Greer’s investigative work links such seemingly unrelated trends as "rape culture" hysteria and Black Lives Matter to an overall campus mindset intent on elevating and celebrating leftist-designated "protected classes" above everyone else – while intimidating, censoring, and punishing those who disagree with this perversely un-American agenda.

In No Campus for White Men, Greer broadens the usual media focus well beyond coverage of demonstrations by easily offended college students, to spotlight the darker forces at work behind the scenes that are feeding higher education’s metastasizing crisis – and how all this results in sustained animosity, first and foremost, toward white men. Greer also documents how this starkly totalitarian culture is not isolated to higher education, but is rather a result of trends already operating in society. Thus, he shows, today's campus madness may eventually dominate much more of America if it is not addressed and reversed soon.

Scott Greer is an editor and columnist at the Daily Caller. His work has appeared on the Drudge Report, RealClearPolitics, Fox Nation, Breitbart and numerous other media outlets.

"Something's wrong on college campuses. Most of us are dimly aware of that. In this bracing and sometimes horrifying book, Scott Greer pulls off the bandage to reveal the suppurating wound beneath. Higher education is rotting in this country. After reading Greer's account, you'll think twice before sending your children off to school." — Tucker Carlson, co-founder and editor in chief of Daily Caller

"Scott Greer treads a surefooted and perceptive path through the post-modern-day American college campus, where the meritocratic ideal of higher education is no more, having been forcibly replaced by a fearsome caste system that elevates all races over Caucasian and “all" genders over male. Must-reading on how it is that the con of “victimhood” becomes a source of downright dictatorial powers that threaten our democratic institutions." — Diana West, columnist and author of The Death of the Grown-Up

"Scott Greer is one of America's most talented up and coming journalists. In No Campus for White Men, Greer exposes you to issues the mainstream media will not cover, and in fact active covers up. If you want to understand what is really going on today on college campuses or in America generally, read this book!" — Mike Cernovich, writer and author of The Gorilla Mindset