In the Rebel Cafe: Interviews with Ed Sanders (Hardcover) 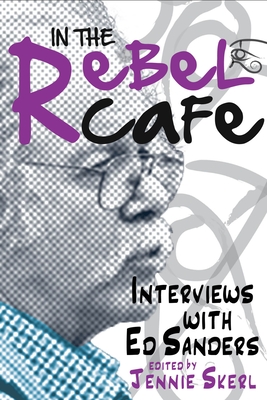 In the Rebel Cafe: Interviews with Ed Sanders is a collection of interviews with Ed Sanders. Interviews have been selected representing each decade of Sanders's career from the 1960s up to the present. All are previously published except for one conducted by a historian about Sanders's
involvement in the peace movement. Interviews have been selected for historical significance (such as his first interview, his appearance on William F. Buckley's Firing Line TV program, history of the Fugs, history of the Lower East Side avant-garde, the evolution of his poetry) and for the depth
and quality of the discussion of his work (interviews by poets and literary critics). Read in chronological order, the interviews constitute a career biography of Sanders as a writer, musician, and activist. In his own words, Sanders chronicles his transition as a poet from lyric to historical
narrative to epic, the development of his fiction and journalism, the creation and revival of the Fugs (his satirical folk rock band), his role in the art and counter-culture of the 1960s, his subsequent historical assessment of the era, and his continuing social commitments. In addition to the
interviews, the book includes a critical introduction to Sanders's life and work, a chronology of Sanders' career, a bibliography of his publications, and a discography of Fugs and Sanders albums.

Jennie Skerl is a Founding Board member and Past President of the Beat Studies Association. She is on the editorial board of the Journal of Beat Studies. She has published William S. Burroughs (Twayne, 1985), William S. Burroughs at the Front: Critical Reception, 1959-1989 (co-edited with RobinLydenberg, Southern Illinois University Press, 1991), A Tawdry Place of Salvation: The Art of Jane Bowles (Southern Illinois University Press, 1997), Reconstructing the Beats (Palgrave Macmillan, 2004), and The Transnational Beat Generation, (co-edited with Nancy M. Grace, Palgrave Macmillan, 2012).Dr. Skerl edited the Winter 2000 special issue of College Literature on Teaching Beat Literature and has published invited introductions to the 25th anniversary edition of Naked Lunch (Grove, 1984), Speed by William Burroughs, Jr. (Overlook Press, 1984), William S. Burroughs: Time-Place-Word (BrownUniversity exhibit catalog, ed. Eric Shoaf, 2000), and the foreword to Retaking the Universe: William Burroughs in the Age of Globalization (ed. Davis Shneiderman and Philip Walsh, Pluto, 2004). She was a contributor of the Dictionary of Literary Biography volume on the Beats (edited by AnnCharters, 1983), the Encyclopedia of Beat Literature (edited by Kurt Hemmer, 2007), and Naked Lunch @ 50 (edited by Oliver Harris and Ian Macfadyen, Southern Illinois University Press, 2009). Her essay on Ed Sanders entitled Sappho Comes to the Lower East Side: Ed Sanders, the Sixties Avant-garde, and Fictions of Sappho was recently published in Hip Sublime: Beat Writers and the Classical Tradition (edited by Sheila Murnaghan and Ralph M. Rosen, Ohio State UP, 2018), and her interview with Sanders was published in the Journal of Beat Studies, (volume 6, 2018). Dr. Skerl has also taughtcourses, delivered guest lectures, and organized conference panels on Beat writers. She retired as Associate Dean of the College of Arts and Sciences at West Chester University.