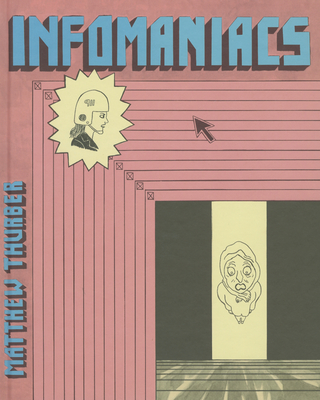 A delightful graphic novel about the tangled workings of the internet

INFOMANIACS is a graphic novel about the tangled workings of the internet--a hilarious detective story that manages to both cheekily critique and document the outer reaches of digital culture. Readers will recognize much of their own daily obsessions, tunnel vision and wacky e-antics in this work. With the intrepid (and memorably named) Amy Shit as his Philip Marlowe, Thurber looks in on "The Scriveners of Tweet Street," Albert Radar, a Joseph Beuys-lookalike psychiatrist, a perfectly preserved brain that has never seen the internet, an organic server farm, the Anthropomorphic Task Force, and so many more weird and wonderfully inventive characterizations. All these quirky personae are skillfully woven into a tightly plotted and fast-paced thriller. The narrative does indeed move at the speed of light--perhaps partly reflecting this publication's genesis as an online serial--and the white knuckle twists and turns are done full justice by Thurber's deft drawing. (Indeed, in its internet incarnation, INFOMANIACS has already garnered a cult of devoted followers.) But above all, the book is marked by the author's restless questioning and heightened sense of the absurd. Accessible and extremely funny, this tour-de-force could be seen as The Long Goodbye for the Tumblr generation. Brooklyn-based cartoonist Matthew Thurber's previous book, 1-800-MICE, was praised by the likes of Daniel Clowes and Matt Groening. He is also a musician who performs under the name of Ambergris, and is the co-owner of the gallery Tomato House.