Protestant's Dilemma: How the (Paperback) 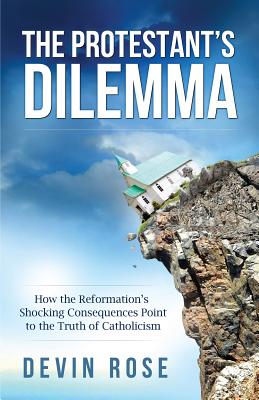 What if Protestantism were true? What if the Reformers really were heroes, the Bible the sole rule of faith, and Christ's Church just an invisible collection of loosely united believers?

As an Evangelical, Devin Rose used to believe all of it. Then one day the nagging questions began. He noticed things about Protestant belief and practice that didn't add up. He began following the logic of Protestant claims to places he never expected it to go -leading to conclusions no Christians would ever admit to holding.

In The Protestant's Dilemma, Rose examines over thirty of those conclusions, showing with solid evidence, compelling reason, and gentle humor how the major tenets of Protestantism - if honestly pursued to their furthest extent - wind up in dead ends. The only escape? Catholic truth. Rose patiently unpacks each instance, and shows how Catholicism solves the Protestant's dilemma through the witness of Scripture, Christian history, and the authority with which Christ himself undeniably vested his Church.

Devin Rose grew up a militant atheist. As a college student he was radically converted to Christ and began practicing Evangelical Christianity. A few years later, long prayer and study led him to enter into full communion with the Catholic Church. Today he is a professional software developer, amateur lay apologist, and proprietor of the blog St. Joseph's Vanguard (http: //www.devinrose.heroicvirtuecreations.com/blog/). His best-selling book The Protestant's Dilemma was published in 2014 by Catholic Answers Press, and he is a popular author for Catholic publications and guest on Catholic TV and radio. Devin lives with his wife and children on his homestead in Texas.