The Road to Louisiana: The Saint-Domingue Refugees 1792-1809 (Paperback) 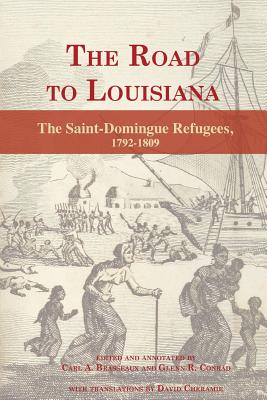 This anthology constitutes the first attempt to fill comprehensively one of the most enduring lacunae in Louisiana historiography--the French-Antillian migration to the lower Mississippi Valley. Generations of Louisiana historians have neglected this influx, involving more than 10,000 Saint-Domingue refugees between 1792 and 1810. These newcomers were subsequently joined by far smaller numbers of French citizens from Guadeloupe and Martinique. Not only were these immigrants largely responsible for the establishment and success of the state's sugar industry, but they also gave New Orleans many of its most notable early institutions--the French opera, newspapers, schools, and colleges--and ultimately its antebellum French flavor. The refugees also contributed Creole cuisine, Creole language, okra, and voodoo to their adopted homeland.

Despite their significance, the refugees have attracted remarkably little scholarly attention. Louisiana's pioneer historians--Fran ois Xavier Martin, Charles E. A. Gayarr , and Alc e Fortier--and their successors have generally accorded them only passing mention. The articles assembled in this anthology are the first to document the migrations and resettlement of these unfortunate people and to assess their impact upon New Orleans. Three of the four articles have appeared earlier in various scholarly journals, some of which are now defunct. Two of the articles have been translated from the original French by David Cheramie to make them accessible to English-speaking historians and genealogists, who had previously been unable to extract and utilize the wealth of information presented by the authors.

The authors, widely recognized for their lasting contributions to the field of Saint-Domingue studies, trace the refugees' long, hard road to Louisiana. Thomas Fiehrer, an expert on the French Antilles, provides an overview of Louisiana's historical Caribbean connection. Gabriel Debien, dean of the French-Antillian historians, investigates the temporary relocation of the Saint-Domingue refugees in Cuba (1793-1815). Debien and the late New Orleans historian and genealogist Ren LeGardeur recount the small-scale migration of refugees into southern Louisiana preceding the massive, early nineteenth-century influx, analyzed by noted Canadian historian Paul Lachance. Finally, the editors' introduction puts the foregoing essays into historical perspective and examines the impact of the refugees on Louisiana's rural parishes.