About Time 9: The Unauthorized Guide to Doctor Who (Series 4, the 2009 Specials) (Paperback) 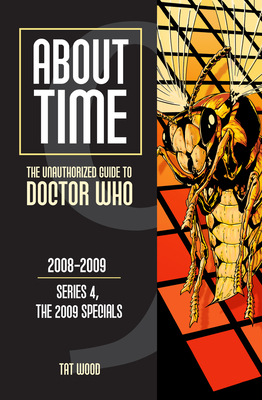 In About Time, the whole of Doctor Who is examined through the lens of the real-world social and political changes as well as ongoing developments in television production that influenced the series in ways big and small over the course of a generation. Armed with these guidebooks, readers will be able to cast their minds back to 1975, 1982, 2005 and other years to best appreciate the series' content and character.

Volume 9 of this series focuses on Series 4 (2008) of the revamped Doctor Who starring David Tennant, as well as the 2009 Specials that finished out his era, with bonus write-ups on Music of the Spheres, the animated adventure Dreamland and The Sarah Jane Adventures story "The Wedding of Sarah Jane Smith." Essays in this volume include: “Should Doctor Who be Appointment Television?”, “How Can Anyone Know About the Time War?”, and “Why Can't Anyone Just Die?”

Since the far-off days of About Time 7, when most people were reasonably sure what number came immediately before 9, Tat Wood has been working further About Time installments and totally non-Doctor-Who-related works (one of which, World History in Minutes, is available through Quercus Books and all good remaindered book shops).

Dorothy Ail's writing has appeared in publications such as Outside In: 160 New Perspectives on 160 Classic Doctor Who Stories by 160 Writers, Obverse Press's Liberating Earth and one of the more recondite entries in Chicks Dig Gaming.

Lars Pearson has served as editor-in-chief and publisher of Mad Norwegian Press since 2001, overseeing such works as the Hugo Award-winning Chicks Dig... essay book series and the (to date) eight-volume About Time series, a seminal work on Doctor Who. With Lance Parkin, he co-writes the definitive Doctor Who timeline Ahistory (now 30,000 words bigger than War and Peace). For three years, he was a staff editor at Wizard Entertainment, working on such magazines as InQuest Gamer, ToyFare and Wizard.