A Brush Full of Colour: The World of Ted Harrison (Hardcover) 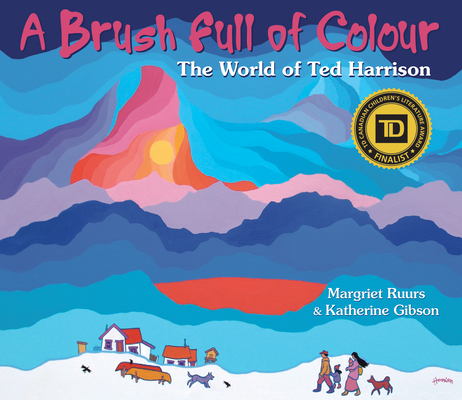 The true story of how a boy's passion for learning saved him from a life in England's coal mines and led him to a career as an internationally acclaimed artist and illustrator, famed for his images of Canada's north. Includes full-colour reproductions of Ted Harrison's art and a preface by the artist himself.

Ted Harrison's (1926-2015) brightly coloured and wildly imaginative paintings set in the Yukon have become synonymous with the North. His instantly-recognizable images of the land of the midnight sun hang in galleries and private collections around the world. But how did a boy who grew up in a drab mining town in northeast England become one of Canada's most beloved and decorated artists?

A Brush Full of Colour is the story of a boy whose passion for learning would save him from a life in the coalmines. The books by the American writer Jack London and Canadian poet Robert Service fired his imagination with scenes of the wilderness and the Klondike Gold Rush. He wanted to become an artist and he went on to art school. A stint in the British Intelligence Service gave him the chance to travel. But Ted never stopped dreaming of the North, and when he saw an advertisement for teachers in Northern Alberta, he jumped at the chance.

Margriet Ruurs and Katherine Gibson trace the life of Ted Harrison and the influences that would lead to his unique style as an artist. Filled with full-colour examples of his vivid art and with a foreword written by Ted Harrison, A Brush Full of Colour will provide inspiration for a new generation of budding artists.

Margriet Ruurs is the award-winning author of twenty-six books for children. Passionate about literacy, she writes children's and educational materials, edits the web magazine KIDSWWWRITE, and conducts author visits and writing workshops at international schools around the world. When she isn't travelling, Margriet runs a booklover's bed and breakfast on Salt Spring Island in British Columbia. Katherine Gibson is an author and keynote speaker who has also written extensively for magazines and newspapers. She spent four years interviewing Ted Harrison while researching her groundbreaking biography Ted Harrison: Painting Paradise. Katherine lives with her husband on Vancouver Island. Ted Harrison is one of Canada's most celebrated artists. A former teacher and author, he is best known for books he wrote and illustrated about Canada's North, including Children of the Yukon and A Northern Alphabet. He also illustrated two poems by Robert Service: The Cremation of Sam McGee and The Shooting of Dan McGrew, which became Canadian bestsellers. A member of the Royal Canadian Academy of Arts, Ted is the recipient of many honours for his contribution to the arts and culture of Canada, including the Order of British Columbia and the Order of Canada, the country's highest civilian honour. Born in County Durham, England, Ted and his wife emigrated to Canada in 1967 and lived in the Yukon for twenty-five years before moving in 1993 to Victoria, British Columbia. Ted passed away in early 2015.