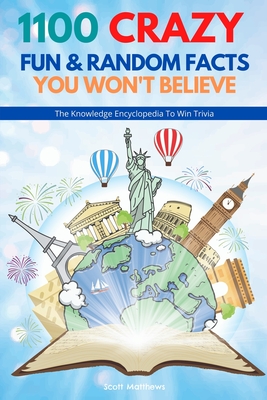 Did you know that psychopaths don't have the ability to see the negative consequences of their actions, only the positive ones. Did you know that the pyramids of Giza were more ancient to the ancient Romans than Rome is ancient to us. Did you know a study conducted by researchers at Harvard School of Public Health revealed that drinking several cups of coffee a day could reduce the risk of suicide in men and women by about 50%.

In these 1100 facts you're going to learn more than you learned from all your high school teachers combined. It's full of interesting information that you can whip out in any conversation. You'll never be lost for words and always have the perfect ice breaker.

You're going to learn more about the world you live in & some of the topics include:

And many, many More What're you waiting for? Knowledge is power Come on in and we'll delve into the interesting and fascinating facts about the world around us. Scroll up and click the 'add to cart' button now.