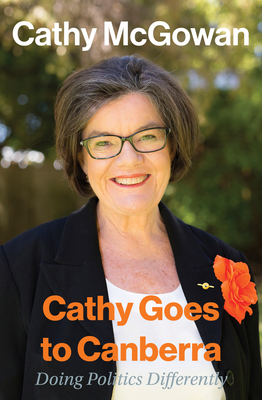 By Cathy McGowan
$29.95
Unavailable, Out of Stock, or Out of Print

Cathy McGowan came to national attention when she won the seat of Indi as an independent in 2013, becoming the first female independent to sit on the crossbench. Winning the seat of Indi, after the Coalition had held the seat for 82 years, was a watershed moment. Indi became ‘Exhibit A’ for future political campaigns—from Kerryn Phelps as the Member for Wentworth to Zali Steggall in Warringah. The community backed McGowan again in 2016 for a second term, including during the minority government of Scott Morrison where, together with the crossbench, she held the balance of power. In 2019 she was thrilled to be part of the campaign that saw Dr Helen Haines elected as Indi’s second female independent, a win that made Australian political history. During her time as a politician, Cathy actively worked in Parliament to develop policy around regional development, a national integrity commission, a code of conduct for politicians, as well as drought policy. In 2019 she was awarded The Accountability Round Table award for political integrity. She is an Officer of the Order of Australia, a Churchill fellow, and lives very happily on her farm in the Indigo Valley in northeastern Victoria. For more information about Cathy’s time in parliament, details of speeches, legislation, pictures, and connections to Voices for Indi, please go to www.cathymcgowan.com.