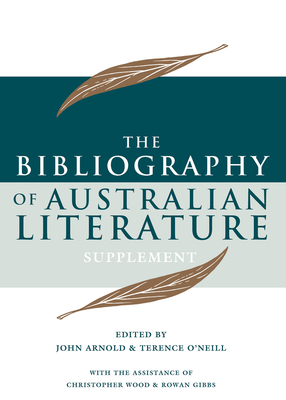 By John Arnold (Editor), Terence O'Neill (Editor)
$199.00
Unavailable, Out of Stock, or Out of Print

The Supplement to the Bibliography of Australian Literature (BAL) completes the most comprehensive reference to Australian creative writing ever published. The four volumes of BAL recorded details of all separately published creative literature by Australian writers from 1788 to 2000. Core genres covered were poetry, fiction, drama, and children’s writing. This Supplement includes some 2700 new Australian authors and over 7000 titles by them. It also provides new and updated information on many of the authors listed in the original four volumes. BAL and the Supplement have no canon. All books and pamphlets in the core genres published by Australian authors are included, regardless of perceived or accepted literary merit. To BAL, the self-published book of verse is as important as the prize-winning novel by an established author. This Supplement, like its predecessors, is an essential source for the study of Australian literature to the end of the twentieth century.

John Arnold has had a long association with Monash University, beginning as an arts undergraduate in the late sixties and early seventies. After working as a research assistant, bookseller, and librarian, he returned to Monash in 1989 to join the recently established National Centre for Australian Studies. He retired from Monash as an Associate Professor at the end of 2012. In addition to being the co-editor of the Bibliography of Australian Literature (2001–2008), he has published widely in the fields of Australian studies and the history of the book. Terence O’Neill, formerly an Assistant Registrar at the University of Melbourne, worked as a bibliographer at the National Centre for Australian Studies, Monash University, from 1993 until 2020. His publications include Australian Children’s Books to 1980: a select bibliography (1989, with Frances O’Neill). He was Associate Editor of the second, third, and fourth volumes of the Bibliography of Australian Literature (2004–2008), and also co-compiler of the first volume (2001) and of The List of Australian Writers (1995).