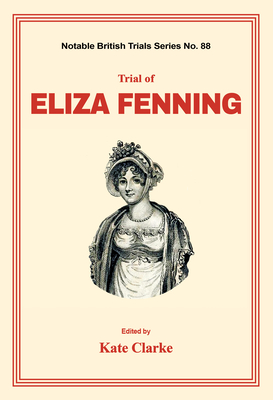 On the afternoon of 21 March 1815 Orlibar Turner and his family sat down to a meal of rump steak, potatoes and dumplings prepared by their young cook Elizabeth (or Eliza) Fenning. Shortly afterwards, the family was taken violently ill with stomach pains and vomiting. Next morning a local surgeon, urgently summoned to the Turners' house in London's Chancery Lane, identified arsenic in the dough that had been used to make the dumplings. Eliza was immediately arrested and within weeks she found herself on trial for attempted murder at the Central Criminal Court of the Old Bailey. After a hasty and woefully inadequate and prejudicial trial, she was convicted and sentenced to death. On 26 July 1815, wearing a white dress and lilac leather boots, she stood quietly on the scaffold outside Newgate Prison in front of a crowd of 45,000 people who had gathered to watch her die, having repeatedly declared her innocence, yet accepting her fate. The trial of Eliza Fenning is one of the most shameful miscarriages of justice in English criminal history. The Establishment closed ranks, determined to see the pretty servant of Irish descent hang. Despite gaining the support of several eminent liberals such as William Hone, John Watkins and Basil Montagu, who campaigned tirelessly for a reprieve, Eliza Fenning never stood a chance. Trial of Eliza Fenning is an important and deeply moving book. It describes the events leading up to the trial, the trial itself, and its aftermath, making use of many interesting and previously unseen documents that help place the case in its social, political and cultural context.