Undaunted: My Life as Policeman and Private Eye (Hardcover) 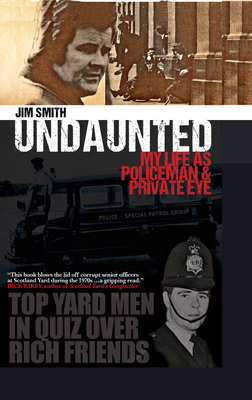 Born and raised in the tenements of Govan, Glasgow, Jim Smith decided on a career with the police from an early age. He joined the Metropolitan Police in 1962 and was posted to H Division - London's East End - where he learned the job, before joining the newly-formed Special Patrol Group and being involved in operations across the Met's district from surveillance of Soho's porn barons to the hunt for cop killer Harry Roberts. In 1968 he transferred to the Criminal Intelligence Department at New Scotland Yard, working on hundreds of cases over the next six years, during which time he earned the British Empire Medal for gallantry for his part in ending the terrorist siege of the Indian High Commission in 1973. Jim's career within the Met brought him into contact with the full range of criminals and criminal activity - including, ultimately, corruption within Scotland Yard itself. In Undaunted, Jim exposes the corrupt cabal in the Yard and relates how he was targeted by a small group of officers there who engineered his transfer out of Scotland Yard, which eventually saw him leaving the job he loved to spend more than 40 years working as a private investigator, working on cases ranging from insurance scams to child kidnapping. With a wealth of colourful and sometimes shocking stories, Undaunted traces Jim's police days and his subsequent work as a private investigator.

Jim Smith is a former policeman and a member of the Criminal Intelligence Department at New Scotland Yard.