Prelude to War: Chronicle of the Coming Cataclysm (Paperback) 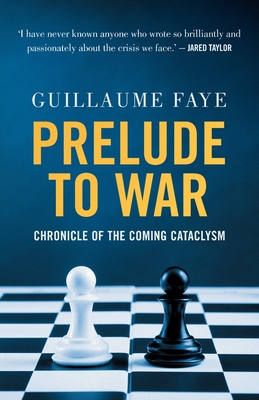 'I have never known anyone who wrote so brilliantly and passionately about the crisis we face.' - Jared Taylor

Guillaume Faye's Prelude to War is a potent indictment of terminally decadent and hopelessly apathetic Europeans. Because of utter indifference and through skillful brainwashing by the corrupt elites, they seem resigned to their fate, namely subjugation under the merciless heel of Islam and flooding by the Third World, and thus eventual extinction in a sea of ravening masses. Faye not only targets the traitors and defeatists in our midst, namely the liberals and the leftists, he also mocks the cowardly attitudes of so-called 'conservatives', who are incapable of actually conserving any authentic values because they constantly make concessions to the prevailing rotten zeitgeist.

The war for the soul and survival of Western civilisation is real, and it is right on our doorstep. Faye paints a truly apocalyptic picture of the twenty-first century as an era of massive conflicts and calamities, which will resemble the Middle Ages in terms of sheer brutality and radical regression. Verily, this is Europe's last stand - either it learns to be sufficiently ruthless, with pagans and Christians united on the offensive again, or it will sink forever into a Muslim-dominated hole of oblivion.