Qanon: The Awakening Begins. The Most Complete and Detailed Report on the Great Conspiracy Against the United States. Discove (Paperback) 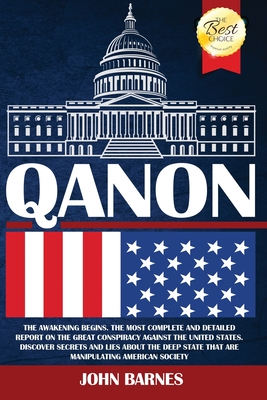 If you don't know QAnon or if you have a vague knowledge of this QAnon movement and if you truly value the truth, you will want to find out about the QAnon movement and the fight that is being pursued for your sake to guard you and your youngsters from misuse and oppression.

The fight between Good and Evil is not symbolic anymore. Evil is being tested and brought upon the equity in government courts and military councils as of today. Criminally degenerate government pioneers, the famous individuals, religious leaders, media figures, and corporate heads will be tested and penalized for violations including injustice, human trafficking, ritual sacrifice, and unspeakable corruption.

This book educates and unveils the significant piece of the truth that has been meticulously covered up and wrongly defamed by the media. It uncovers a phenomenal development in progress, a clash of amazing proportions. Regardless of whether you know it or not, you're included on the grounds that the consequence of this fight will decide the destiny of your children and people in the future both in America and around the globe. Be that as it may, you may just be enigmatically mindful of QAnon or "Q," if by any means.

This awesome book tells the historical background of a mysterious banner on the free-discourse sites 4Chan and afterward 8Chan and how he (or maybe they) assembled an after of a large number of watchers around the world. With an insider's information on the battle plan, and "Q" level military knowledge leeway, QAnon's communications are frequently cryptic and coded. QAnon is an ace of the Socratic technique, posing inquiries and encouraging supporters to do their own examination, to be analytical, and to challenge themselves to think.

Have you been persuaded by legacy media assertions that Q is a fraud or a "conspiracy theory?" Instead, ponder upon why the media would demand that you, a reasoning and able grown-up, ought to ignore Q at all cost? On the off chance that a simple "conspiracy theory," why all the recognition? What thoughts are so risky you ought to never hear them? Is there another side to the story?

Read QAnon: The Awakening Begins. The Most Complete and Detailed Report on The Great Conspiracy Against The United States. Discover Secrets and Lies About the Deep State That Are Manipulating American Society and decide for yourself

Buy Now to get started