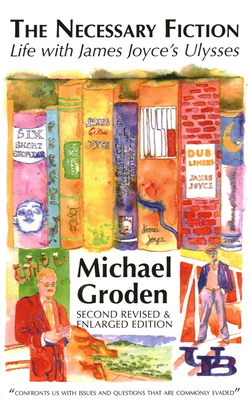 This unusual book is a fascinating work of personal criticism or "biblio-memoir" which will appeal to all interested in James Joyce's work, and, more widely, to those interested in responses to great art. It focusses on the life-long appeal of a particular work of art on a single individual who has been a leading Joyce scholar for 40 years.

Professor Groden has taught Ulysses to undergraduates, to graduate students, and to adults outside of universities in a long and distinguished career. He is the author of two often-cited scholarly books on Joyce's novel, and he has overseen the 63-volume facsimile reproduction of his manuscripts.

Groden says: "I've often been asked why I've devoted so much of my life to Joyce's novel. The Necessary Fiction tries to answer that question. I wrote the book partly with seasoned readers and scholars of Ulysses in mind, but I aimed it especially at readers who desire to read, have attempted to read, or have even succeeded in reading Joyce's novel and who will welcome an accessible, very personal introduction to it as well as a case for reading or rereading it."

"A neologism that has been applied to my work - 'autobloomography' - captures what I am trying to do in The Necessary Fiction.

"The first half of the book considers various possible reasons for Ulysses'powerful impact on me when I read it as a 19-year-old undergraduate at Dartmouth College and later worked on Joyce's manuscripts for his novel as a graduate student at Princeton University. This section deals with each reason in relation to a significant person in my early life.

"The second half discusses Ulysses' continuing fascination for me in my professional adult life as a university professor and Joyce scholar. Throughout the book, I've interspersed accounts of my life with Ulysses with analyses of the novel itself."

The Necessary Fiction is some 79,000 words long with an additional 9,600-word appendix that provides a chapter-by-chapter summary of Ulysses.

Michael Groden is Distinguished University Professor Emeritus in the Department of English and Writing Studies, Western University Canada. Born in Buffalo, New York, he received a B.A. from Dartmouth College (magna cum laude) in 1969 and an M.A. and Ph.D. from Princeton University in 1975. / He is the author of Ulysses in Progress (Princeton University Press, 1977; Princeton Legacy Library paperback, 2014) and Ulysses in Focus: Genetic, Textual, and Personal Views (Florida James Joyce Series, University Press of Florida, 2010; paperback, 2012), general editor of The James Joyce Archive (63 volumes, Garland Publishing, 1977-79), compiler of James Joyce's Manuscripts: An Index (Garland Publishing, 1980), and co-editor of The Johns Hopkins Guide to Literary Theory and Criticism (Johns Hopkins University Press, 1994; 2nd edition, 2005; Chinese translation, 2011), Genetic Criticism: Texts and Avant-textes (University of Pennsylvania Press, 2004), Praharfeast: James Joyce in Prague (Litteraria Pragensia, 2012), and Contemporary Literary and Cultural Theory: The Johns Hopkins Guide (Johns Hopkins University Press, 2012). / His work has been internationally recognised by major awards. On June 16, 2004, the 100th anniversary of Bloomsday, he was awarded an honorary D.Litt. degree by University College Dublin: Joyce's university; in 2006 he was named a Distinguished University Professor at Western University;He has held a Guggenheim Fellowship, and was elected as a Fellow of the Royal Society of Canada in 2007. In May 2011 he was awarded the Hellmuth Prize for Achievement in Research, the most prestigious award for research at Western University in Canada, where he taught from 1975 until he retired in 2014.