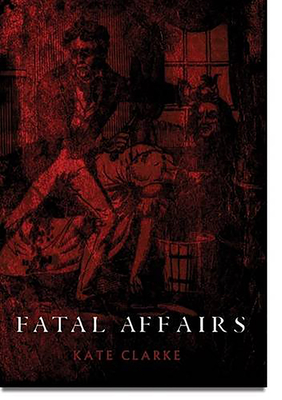 In FATAL AFFAIRS, Kate Clarke recounts five extraordinary murder cases from the eighteenth and nineteenth century where love and romantic infatuation ended in death. In 1752, MARY BLANDY fell in love with army officer WILLIAM CRANSTOUN. Thwarted by her father's opposition to the match, they plotted his murder by arsenic poisoning. Cranstoun evaded justice, but Mary was hanged at Oxford Castle. Sexually violated as a child, ELIZABETH JEFFRIES and her lover JOHN SWAN shot and killed her uncle as he lay in bed. They were both publicly executed in Epping Forest in 1752. In 1765, nineteen-year-old KATHARINE NAIRN began a reckless affair with her brother-in-law Lieutenant PATRICK OGILVIE. When her husband died after a sudden, excruciating illness, Katharine and Patrick were arrested and convicted of incest and murder by poisoning. Ogilvie was hanged, but Katharine made a daring escape from the notorious Tolbooth Prison in Edinburgh and fled to France. On Christmas Eve in 1836, JAMES GREENACRE brutally murdered his wife-to-be Hannah Brown. He dismembered her body and dumped the remains in several locations around London. His mistress SARAH GALE spent days removing the blood stains from the crime scene. Greenacre met his death on the scaffold; Gale was transported to Australia where her life took an unexpected turn. In 1870, Brighton spinster CHRISTIANA EDMUNDS developed an inappropriate attachment to DR CHARLES BEARD. After attempting to murder Mrs Beard, Christiana began distributing poisoned chocolate creams around the town, killing one four-year-old boy. Sentenced to death at the Old Bailey she was reprieved on the grounds of insanity and spent the rest of her life in Broadmoor Hospital. FATAL AFFAIRS examines these cases in great detail and offers new insights into the motivations behind these dreadful crimes. It makes for fascinating and chilling reading.