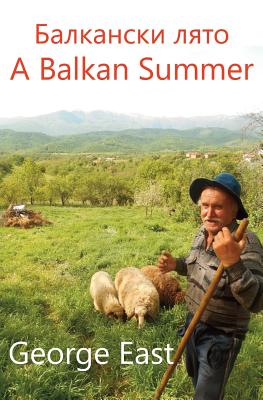 High summer in the Balkans and George East arrives in Bulgaria to investigate an apparently potty scheme to rescue a dying mountain village. While there, the eccentric travel writer gets to know an array of fascinating locals from the President Putin lookalike and Meerkat soundalike to Mr Rotavator and the man who takes his milk direct from cows. Beyond the village, George discovers much about the little-known country that Bill Bryson described as a 'near-death experience.' The book also contains historical and cultural notes. During his long summer in Bulgaria, George finds himself falling under the spell of an ancient kingdom and its people...This first edition includes traditional Bulgarian recipes.

After leaving school under a cloud, George East set out on a varied career path which included (failed) Rock god, Impressionist (house) painter, plumber, welder, demolition engineer, pickled onion manufacturer, private detective, male model, lorry driver, brewer's drayman, PR and Marketing guru, magazine editor, freelance journalist, hotel manager, snooker hall owner, seamstress, night club bouncer, DJ and radio and television presenter and pub landlord. After winning the title of Britain's Worst Publican, George and his wife Donella decided to see how they would fair on the other side of the English Channel. They started their journey in France, where they bought a ruined mill on ten acres of meadows, woods, streams and mud in Normandy. As they struggled to survive, George wrote a book warning other Brits about the perils of buying property in and moving to live in France. To the surprise of the Easts and the astonishment of their bank managers on both sides of the Channel, Home & Dry in France (A year in Purgatory) became a best-seller. More books about the East's adventures and travels in rural France followed. Following living in and writing about five regions in George's 'French Impressions' series, the couple set out to record their first impressions of less well-known European countries. A Balkan Summer was the initial 'First Impressions' book, set in Bulgaria and a tiny village where the average age was 72 and there were more donkeys than cars. As well as travel books, George is the author of a series featuring the adventures of a dodgy ferry port detective, while Donella collects and publishes traditional recipes from the countries through which they travel. To find out more about George and Donella and their work, visit their website at www.george-east.net