The Eponym Dictionary of Amphibians (Hardcover) 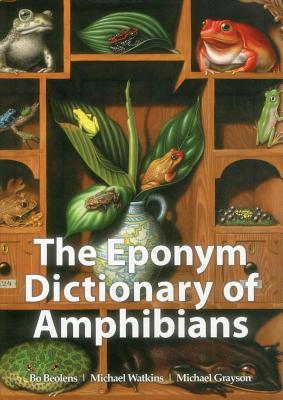 New species of animal and plant are being discovered all the time. When this happens, the new species has to be given a scientific name in addition to any common, vernacular name. In either case the species may be named after a person, often the discoverer but sometimes an individual they wished to honour or perhaps were staying with at the time the discovery was made. Species names related to a person are 'eponyms'. Many scientific names are allusive, esoteric and even humorous, so an eponym dictionary is a valuable resource for anyone, amateur or professional, who wants to decipher the meaning and glimpse the history of a species name. Sometimes a name refers not to a person but to a fictional character or mythological figure. The Forest Stubfoot Toad Atelopus farci is named after the FARC, a Colombian guerrilla army who found refuge in the toad's habitat and thereby, it is claimed, protected it. Hoipollo's Bubble-nest Frog Pseudophilautus hoipolloi was named after the Greek for 'the many', but someone assumed the reference was to a Dr Hoipollo. Meanwhile, the man who has everything will never refuse an eponym: Sting's Treefrog Dendropsophus stingi is named after the rock musician, in honour of his 'commitment and efforts to save the rainforest'. Following the success of their Eponym Dictionary of Reptiles, the authors have joined forces to give amphibians a similar treatment. They have tracked down 1,609 honoured individuals and composed for each a brief, pithy biography. In some cases these are a reminder of the courage of scientists whose dedicated research in remote locations exposed them to disease and even violent death. The eponym ensures that their memory will survive, aided by reference works such as this highly readable dictionary. Altogether 2,668 amphibians are listed.