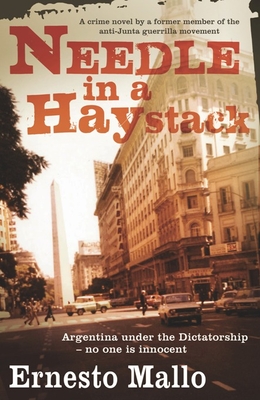 By Ernesto Mallo, Jethro Soutar (Translator)
This Book Is Not Sold Online - Inquire In Store
Not In Stock/Special Order

"This is not simply a triumph of style; it is both a reflection on a time of bloodshed and a raw vision of human misery."--Guillermo Saccomanno, winner of the Argentine National Literature Prize

"This man knows. He knows about guns, knows about women, knows about dead bodies. . . . But above all he knows how to narrate."--Ana Maria Shua, author of El peso de la tentacion

Superintendent Lascano is a detective working under the shadow of military rule in Buenos Aires in the late 1970s. Sent to investigate a double murder, he arrives at the crime scene to find three bodies. Two are clearly the work of the Junta's death squads, murders he is forced to ignore; the other one seems different.

The trail leads Lascano through a decadent Argentina, a country poisoned to its core by the tyranny of the regime. The third corpse turns out to be that of Biterman, moneylender and Auschwitz survivor. When Lascano digs too deep, he must confront Giribaldi, an army major, quick to help old friends but ruthless in dealing with dissenters such as Eva, the young militant with whom Lascano is falling in love.

Born in 1948, Ernesto Mallo is a published essayist, newspaper columnist, screenwriter, and playwright. He is a former anti-Junta militant who was pursued by the dictatorship. Needle in a Hay Stack is his first novel and the first in a trilogy with superintendent Lascano. The first two are being made into films.

Ernesto Mallo: Born in 1948, Mallo is a published essayist, newspaper columnist, and playwright. He is a former militant, pursued by the dictatorship as a member of the Fuerzas Armadas Revolucionarias, which was later absorbed by the Montoneros guerilla movement. Needle in a Haystack is his first novel and the first in a trilogy with detective Lascano. The first two are being made into films in Argentina. Jethro Soutar: Jethro Soutar, born in Sheffield, lives in London and has recently published two works of non-fiction, 'Ronaldinho: Football's Flamboyant Maestro' and a part biography, part chronicle of a film movement, entitled 'Gael Garcia Bernal and the Latin American New Wave', published in July 2008. This is his first translation of fiction