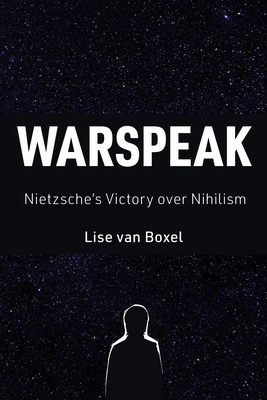 By Lise Van Boxel
$24.99
Unavailable, Out of Stock, or Out of Print

A comprehensive interpretation of Nietzsche's thought, guided by the problem and task that Nietzsche himself identified as the heart of his own life' work: nihilism and the need to overcome it. Warspeak centers on a focused reading of Nietzsche's On The Genealogy of Morality, driven and ordered by the three major themes Nietzsche used to structure his attack on nihilism and to lay the foundation for his life-affirming counter-ideal: the moral-theological prejudice, the genealogical method, and utilitarianism. Van Boxel tracks the emergence of a new human type in Nietzsche's work, and explains how this represents a victory over nihilism and a more hopeful future for humanity. Provocatively, the book expresses a distinctly feminine conception of philosophy, as a necessary corrective to the excessively masculine form of earlier philosophy. Like Nietzsche's own writing, Warspeak defies traditional academic categories, dealing with poetry, literature, science, politics, and philosophy, in a style that is sometimes analytical and sometimes literary. Threaded through the book as a whole is a novel-like account of the evolution of the latest, most vital human life-form as Nietzsche understands it. Warspeak is the culmination of van Boxel's lifelong study of Nietzsche. A challenging book, by a singular thinker, that boldly confronts the central riddle of Nietzsche's thought.

Lise van Boxel was an expert on Nietzsche, with a particular focus on his view of nihilism. She contributed chapters on Nietzsche to Prefaces for Unwritten Works (St. Augustine's Press, 2005) and wrote "Nietzsche in Eden" in The Pious Sex (Lexington Books, 2010). She was a professor at St. John's College (Santa Fe / Annapolis), where she taught courses in mathematics, science, language, religion, literature, and philosophy. She received a B.A., English Literature Specialist and Political Science Major, from Trinity College, The University of Toronto, an M.A. in Political Philosophy from Boston College, and a Ph.D. in Political Philosophy from The University of Toronto. She was also a co-founder of Combat and Classics, a series of podcasts and free online seminars for active duty, reserve, and veteran U.S. military members, sponsored by St. John's College.