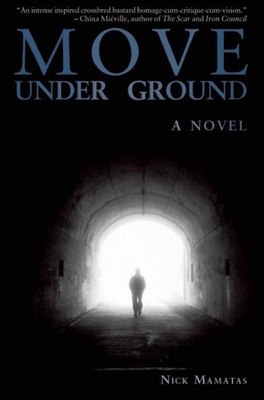 "Those who appreciate sophisticated, progressive horror and fantasy fiction should eat [Move Under Ground] up."—Publishers Weekly

The year is nineteen-sixty-something, and after endless millennia of watery sleep, the stars are finally right. Old R’lyeh rises out of the Pacific, ready to cast its damned shadow over the primitive human world.

The first to see its peaks: an alcoholic, paranoid, and frightened Jack Kerouac, who had been drinking off a nervous breakdown up in Big Sur. Now Jack must get back on the road to find Neal Cassady, the holy fool whose rambling letters hint of a world brought to its knees in worship of the Elder God Cthulhu.

Move Under Ground is a horror novel mashup that combines the Beat style of Jack Kerouac with the cosmic horror of H. P. Lovecraft's Cthulhu Mythos.

Nick Mamatas is the author of several novels, including The Last Weekend and I Am Providence. His short fiction has appeared in Best American Mystery Stories, Year’s Best Science Fiction & Fantasy, and many other anthologies and magazines. Nick’s previous anthologies include the Bram Stoker Award-winner Haunted Legends (co-edited with Ellen Datlow) and The Locus Award nominees The Future is Japanese and Hanzai Japan (both co-edited with Masumi Washington). Nick’s editorial work has also been nominated for the Hugo and World Fantasy awards. He resides in the California Bay Area.