The Dulce Wars: Underground Alien Bases and the Battle for Planet Earth: This is Not Science Fiction. . .A True-To-Life War Of The Wor (Paperback) 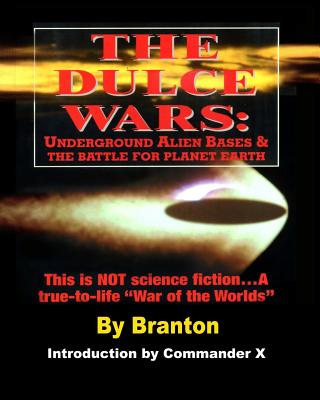 IN THE CORNER OF A SMALL TOWN IN AMERICA'S SOUTHWEST SOMETHING VERY STRANGE IS GOING ON IS AN ALIEN "FIFTH COLUMN" ALREADY ACTIVE ON EARTH PREPARING TOTAL CONQUEST VIA IMPLANTATION'S AND MIND CONTROL?According to the author -- who only used his first name for privacy reasons (and because he is deathly afraid ) -- "The repercussions of what is taking place here will soon be felt throughout the whole country, when the beast has reached out with its deadly tentacles to invade our seemingly impregnable fortress, causing it to crumble and fall."Did U.S. Military Forces perish recently in hand-to-hand combat with a group of hostile Greys who subsequently seized control of one of our Top-Secret underground bases? And has the New World order established an unholy alliance with this group of ETs?In Dulce, New Mexico, seemingly everything has gone haywire, becoming the epicenter of: Cattle mutilation phenomena. . .Energy Grids. . .Secret Societies. . .Underground Anomalies. . .Conspiracies Between Townsfolk and "Outsiders". . . Unexplained Legends and Mythology Concerning Various "Lost Civilizations". . . Geomagnetic Enigmas. . .Abductions and Missing Time. . .Hostile Alien Beings. . .Peculiar Sounds and "Movements" Coming From Beneath The Earth. As discussed on the History Channel, Coast to Coast, and TheParaCast.Com.