Severed: The True Story of the Black Dahlia (Paperback) 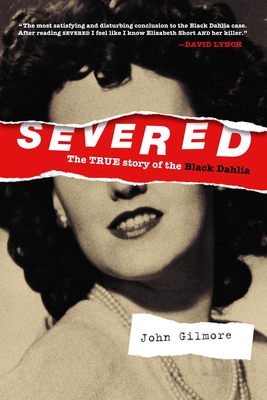 The grisly 1947 murder of aspiring starlet and nightclub habitue Elizabeth Short, known even before her death as the "Black Dahlia," has over the decades transmogrified from L.A.'s "crime of the century" into an almost mythical symbol of unfathomable Hollywood Babylon/film noir glamour-cum-sordidness. It is somehow fitting that author John Gilmore should be the one to unravel the multilayered mystery of this archetypal Los Angeles slaying as it begins to take its place in the collective memory, somewhere next to Bluebeard and Jack the Ripper, a cautionary tale about the pretty girl who came to Hollywood to be a movie star and wound up in a dirt lot, hacked in two. The Black Dahlia murder--unlike such earlier headline-grabbing cases as the St. Valentine's Day Massacre and the Lindbergh kidnapping--was the first case to command the attention of post-war America with its stark carnality.
In hard-boiled yet haunting prose, Gilmore tells several previously unrevealed stories at once, each filled with its own bizarre elements through which the book transcends the true-crime genre and becomes literature. One is the tale of victim Elizabeth Short, small-town beauty queen with big hopes who seemed to float through her tragically futile life as an alluring yet doom-laden enigma. Severed also unfolds the tangled inside story of the police investigation and the remorseless Hearst-stoked press hoopla that paralleled it. Gilmore reveals the twisted psychology and down-and-out life story of the murder suspect--as well as the startling circumstances of the suspect's "indirect confession" wherein he fingers his female-impersonator pal as the purported killer. Severed is the first non-fiction book to offer a documented solution to the Black Dahlia case as endorsed by law enforcement and forensic science experts. In the just over 50 years since the murder, the terms serial killer and behavioral profiling have moved from FBI jargon to essential archetypes of the American cultural landscape, crossing the nebulous bounds of streaming series, book, and blockbuster movie.
Now that the reader can put a face to Elizabeth Short's killer through Gilmore's relentless spade work, the spectral luster of this most spectacular "unsolved" murder in American crime history seems not diminished but enhanced. Ultimately, John Gilmore boils down its undying allure to this haiku-like equation: "The pale white body severed in two and left for the world to view, and her name: Black Dahlia.