Quarterly Essay 68 Without America: Australia in the New Asia (Paperback) 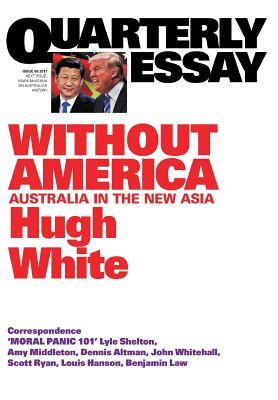 America is fading, and China will soon be the dominant power in our region. What does this mean for Australia's future?

In this controversial and urgent essay, Hugh White shows that the contest between America and China is classic power politics of the harshest kind. He argues that we are heading for an unprecedented future, one without an English-speaking great and powerful friend to keep us secure and protect our interests.

White sketches what the new Asia will look like, and how China could use its power. He also examines what has happened to the United States globally, under both Barack Obama and Donald Trump - a series of setbacks which Trump's bluster on North Korea cannot disguise.

White notes that we have got into the habit of seeing the world through Washington's eyes, and argues that unless this changes, we will fail to navigate the biggest shift in Australia's international circumstances since European settlement. The signs of failure are already clear, as we risk sliding straight from complacency to panic.

'For almost a decade now, the world's two most powerful countries have been competing. America has been trying to remain East Asia's primary power, and China has been trying to replace it. How the contest will proceed - whether peacefully or violently, quickly or slowly - is still uncertain, but the most likely outcome is now becoming clear. America will lose, and China will win.' --Hugh White, Without America