Quarterly Essay 65 The White Queen: One Nation and the Politics of Race (Paperback) 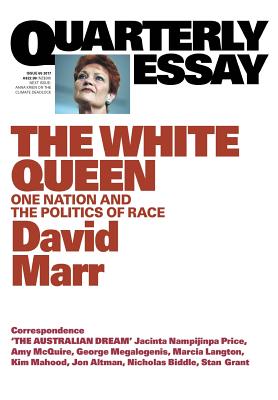 This is book number 65 in the Quarterly Essay series.

Most Australians despise what Pauline Hanson stands for, yet politics in this country is now orbiting around One Nation.

In this timely Quarterly Essay, David Marr looks at Australia's politics of fear, resentment and race. Who votes One Nation, and why? How much of this is due to inequality? How much to racism? How should the major parties respond to anti-immigrant and anti-Muslim voices? What damage do Australia's new entrepreneurs of hate inflict on the nation?

Written with drama and wit, this is a ground-breaking look at politics and prejudice by one of Australia's best writers.

"This woman went to prison, danced the cha-cha on national television for a couple of years, and failed so often at the ballot box she became a running joke. But the truth is she never left us. She was always knocking on the door. Most of those defeats at the polls were close-run things. For twenty years political leaders appeased Hanson's followers while working to keep her out of office. The first strategy tainted Australian politics. The second eventually failed. So she's with us again - the Kabuki make-up, that mop of red hair and the voice telling us what we already know: 'I'm fed up.'" --David Marr