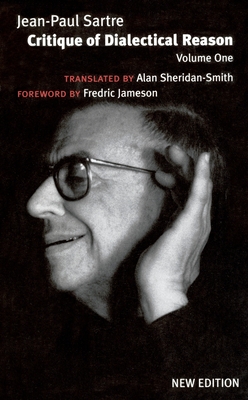 This is book number 1 in the Critique of Dialectical Reason series.

At the height of the Algerian war, Jean-Paul Sartre embarked on a fundamental reappraisal of his philosophical and political thought. The result was the Critique of Dialectical Reason, an intellectual masterpiece of the twentieth century, now republished with a major original introduction by Fredric Jameson. In it, Sartre set out the basic categories for the renovated theory of history that he believed was necessary for post-war Marxism.

Sartre’s formal aim was to establish the dialectical intelligibility of history itself, as what he called ‘a totalisation without a totaliser’. But, at the same time, his substantive concern was the structure of class struggle and the fate of mass movements of popular revolt, from the French Revolution at the end of the eighteenth century to the Russian and Chinese revolutions in the twentieth: their ascent, stabilisation, petrification and decline, in a world still overwhelmingly dominated by scarcity.

Jean-Paul Sartre was a prolific philosopher, novelist, public intellectual, biographer, playwright and founder of the journal Les Temps Modernes. Born in Paris in 1905 and died in 1980, Sartre was awarded the Nobel Prize for Literature in 1964—and turned it down. His books include Nausea, Intimacy, The Flies, No Exit, Sartre’s War Diaries, Critique of Dialectical Reason, and the monumental treatise Being and Nothingness.

Fredric Jameson is Distinguished Professor of Comparative Literature at Duke University. The author of numerous books, he has over the last three decades developed a richly nuanced vision of Western culture’s relation to political economy. He was a recipient of the 2008 Holberg International Memorial Prize. He is the author of many books, including Postmodernism, Or, The Cultural Logic of Late Capitalism, The Cultural Turn, A Singular Modernity, The Modernist Papers, Archaeologies of the Future, Brecht and Method, Ideologies of Theory, Valences of the Dialectic, The Hegel Variations and Representing Capital.

“The work is a landmark in modern social thought ... a turning point in the thinking of our time.”—Raymond Williams, Guardian

“The Critique is essential to any serious understanding of Sartre.”—George Steiner, Sunday Times