Monocultures of the Mind: Perspectives on Biodiversity and Biotechnology (Paperback) 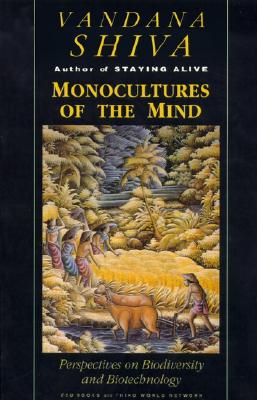 Vandana Shiva has established herself as a leading independent thinker and voice for the South in that critically important nexus where questions of development strategy, the environment and the posititon of women in society coincide. In this new volume, she brings together her thinking on the protection of biodiversity, the implications of biotechnology, and the consequences for agriculture of the global pre-eminence of Western-style scientific knowledge.

In lucid and accessible fashion, she examines the current threats to the planet's biodiversity and the environmental and human consequences of its erosion and replacement by monocultural production. She shows how the new Biodiversity Convention has been gravely undermined by a mixture of diplomatic dilution during the process of negotiation and Northern hi-tech interests making money out of the new biotechnologies. She explains what these technologies involve and gives examples of their impact in practice. She questions their claims to improving natural species for the good of all and highlights the ethical and environmental problems posed.

Underlying her arguments is the view that the North's particular approach to scientific understanding has led to a system of monoculture in agriculture - a model that is not being foisted on the South, displacing its societies' ecologically sounder, indigenous and age-old experiences of truly sustainable food cultivation, forest management and animal husbandry. This rapidly accelerating process of technology and system transfer is impoverishing huge numbers of people, disrupting the social systems that provide them with security and dignity, and will ultimately result in a sterile planet in both North and South, In a policy intervention of potentially great significance, she calls instead for a halt, at international as well as local level, to the aid and market incentives to both large-scale destruction of habitats where biodiversity thrives and the introduction of centralised, homogenous systems of cultivation.

Vandana Shiva was one of India's leading physicists and is now a leading environmental campaigner, the winner of the Alternative Nobel Peace Prize and the author of several books, including Soil not Oil (2008), Earth Democracy (2005) and Stolen Harvest (2001).