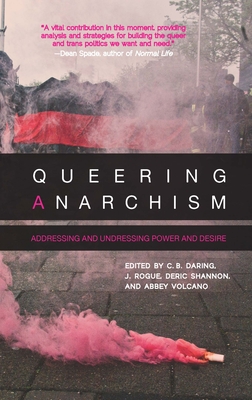 Definitely a book worth reading, regardless of the labels of normalcy you've pasted up to yourself or grown accustomed to letting others do the nasty gluing for you.--Bookslut

The divide is growing between the pro-military, pro-police, marriage-seeking gay and lesbian rights politics we see in the headlines every day and the grassroots racial and economic justice centered queer and trans resistance that fights to end prisons, borders, war and poverty. Queering Anarchism a vital contribution in this moment, providing analysis and strategies for building the queer and trans politics we want and need. --Dean Spade, Normal Life

"A much-needed collection that thinks through power, desire, and human liberation. These pieces are sure to raise the level of debate about sexuality, gender, and the ways that they tie in with struggles against our ruling institutions."--Roxanne Dunbar-Ortiz, Outlaw Woman "Against the austerity of straight politics, Queering Anarchism sketches the connections between gender mutiny, queer sexualities, and anti-authoritarian desires. Through embodied histories and incendiary critique, the contributors gathered here show how we must not stop at smashing the state; rather normativity itself is the enemy of all radical possibility."--Eric A. Stanley, co-editor of Captive Genders What does it mean to queer the world around us? How does the radical refusal of the mainstream codification of GLBT identity as a new gender norm come into focus in the context of anarchist theory and practice? How do our notions of orientation inform our politics?and vice versa? Queering Anarchism brings together a diverse set of writings ranging from the deeply theoretical to the playfully personal that explore the possibilities of the concept of queering, turning the dominant, and largely heteronormative, structures of belief and identity entirely inside out. Ranging in topic from the economy to disability, politics, social structures, sexual practice, interpersonal relationships, and beyond, the authors here suggest that queering might be more than a set of personal preferences?pointing toward the possibility of an entirely new way of viewing the world.

Deric Shannon, C.B. Daring, J. Rogue, and Abbey Volcano are anarchists and activists who work in a wide variety of radical, feminist, and queer communities across the United States.

Deric Shannon is a long time anarchist currently living in Connecticut. He is co-editor of The Accumulation of Freedom: Anarchist Writings on Economics (AK Press 2012), Political Sociology: Oppression, Resistance, and the State (Pine Forge Press 2010), and Contemporary Anarchist Studies (Routledge 2009). He is also the author of many book chapters, journal articles, and reviews typically on social movements, culture, sexuality, and their intersections with radical politics. He is a member of Queers without Borders and a believer in radically different futures. J. Rogue is a queer intersectional anarchist-communist who has been organizing in anarchist, feminist and radical queer communities for over ten years. Much of her organizing has centered around HIV/AIDS, prisons, and militarism. She has also been involved in transfeminist organizing with Camp Trans, and participated in several radical queer and feminist conferences and projects over the years. Rogue is a member of the Workers Solidarity Alliance and currently lives and works in Austin, Texas. C. B. Daring is an intersectional anarchist-communist queer sex worker. They have spent many years organizing within the feminist, sex work, anarchist, and labor movements nationally and locally. They have been published in various magazines, newspapers and blogs. They are a member of the Workers Solidarity Alliance, a collective member at Red Emma's Bookstore and Coffeehouse and a popular education facilitator. Abbey Volcano is an anarchist militant currently living in Eastern Connecticut, typically organizing with the Quiet Corner Solidarity Network and struggles around reproductive freedom. When she's not reading awesome graphic novels and watching sci-fi, she's subverting the dominant paradigm, typically writing on identity, sexuality, and gender. She's a member of the Workers Solidarity Alliance, Queers Without Borders, and a constant critic of the violence and boredom inherent in institutionalized hierarchies of all kinds.