Lost Lives: The Stories of the Men, Women and Children Who Died as a Result of the Northern Ireland Troubles (Hardcover) 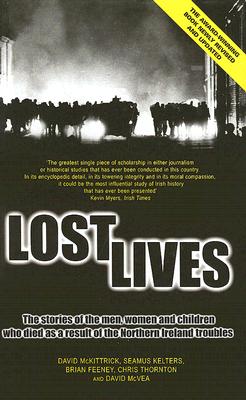 By David McKittrick, Seamus Kelters, Brian Feeney
This Book Is Not Sold Online - Inquire In Store
Hard to Find

This is the story of the Northern Ireland troubles told as never before. It is not concerned with the political bickering, but with the lives of those who have suffered and the deaths which have resulted from more than three decades of conflict. Over a seven-year period, the authors examined every death which was directly caused by the troubles. Their research involved interviewing witnesses, scouring published material, and drawing on a range of investigative sources to produce this study. They trace the origins of the conflict from the firing of the first shots, through the carnage of the 1970s and 1980s and up to the republican and loyalist ceasefires and beyond. All the casualties are remembered herethe RUC officer, the young soldier, the IRA volunteer, the loyalist paramilitary, the Catholic mother, the Protestant worker, and the new-born baby.