Montesquieu' 'The Spirit of the Laws': A Critical Edition (Hardcover) 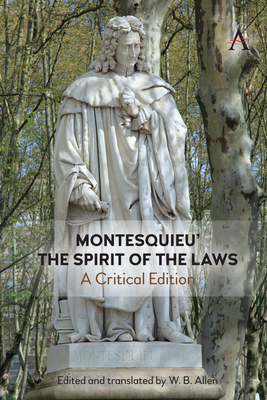 The Spirit of the Laws not only systematizes the foundational ideas of "separation of powers" and "balances and checks," it provides the decisive response to the question of whether power in the nation-state can be limited in the aftermath of the Westphalian settlement of 1648. It describes a civilizational change through which power becomes domesticated, with built-in resistance to attempts to absolutize (or make total) political power. As such, it is the Bible of modern politics, now made more accessible to English readers than it ever has been.

There have been in English only two prior translations of this work that first appeared in 1748. The deficiencies of those two efforts have been broadly identified in the scholarship. Although the text is still used with regularity in university instruction (having been recovered after a lull in the 1950s and 60s), it deserves - and now receives - a presentation that enhances its usefulness in the analysis both of politics and the philosophical foundations of human life.

Montesquieu's singularity - the first secular argument against race-based slavery and only the second secular argument against the servitude of women - provides a special heritage for the modern word to preserve and a key to making operational those fundamental insights within the context of sustained political and cultural development. The replacement of blood and tribe with the universal attributes of humanity (while recognizing the highly variable ecologies of communities) constitutes the single-most important moral and political development of the modern world. And The Spirit of the Laws bears a primary responsibility for that accomplishment.

W. B. Allen studies and writes broadly in political philosophy and history, with special focus on traditions of self-government and liberalism.