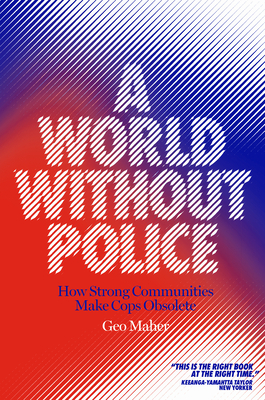 If police are the problem, what’s the solution?

Tens of millions of people poured onto the streets for Black Lives Matter, bringing with them a wholly new idea of public safety, common security, and the delivery of justice, communicating that vision in the fiery vernacular of riot, rebellion, and protest. A World Without Police transcribes these new ideas—written in slogans and chants, over occupied bridges and hastily assembled barricades—into a compelling, must-read manifesto for police abolition.

Compellingly argued and lyrically charged, A World Without Police offers concrete strategies for confronting and breaking police power, as a first step toward building community alternatives that make the police obsolete. Surveying the post-protest landscape in Minneapolis, Philadelphia, Chicago, and Oakland, as well as the people who have experimented with policing alternatives at a mass scale in Latin America, Maher details the institutions we can count on to deliver security without the disorganizing interventions of cops: neighborhood response networks, community-based restorative justice practices, democratically organized self-defense projects, and well-resourced social services.

A World Without Police argues that abolition is not a distant dream or an unreachable horizon but an attainable reality. In communities around the world, we are beginning to glimpse a real, lasting justice in which we keep us safe.

Geo Maher has previously taught at Vassar College, San Quentin State Prison, and the Venezuelan School of Planning in Caracas. He is the author of five books, including We Created Chavez, Decolonizing Dialectics, Building the Commune, Spirals of Revolt, and World Without Police.

“Grounded in a powerful narrative of the massive 2020 Black Lives Matter led protests of a police murder in Minneapolis that enveloped the world, scholar-activist Geo Maher moves to and from the historical roots of policing in the institutions of slave patrols, border guards, settler colonialism, and capitalism. This is a book that readers will want to carry around, returning to passages for inspiration.”
—Roxanne Dunbar-Ortiz, author of An Indigenous People’s History of the United States

“From the ashes of the Third Precinct, Geo Maher looks for what grows when the deadly shadow of the police is removed. He writes an urgent history of the present. The ingredients of white supremacy, colonialism, and capitalism are baked into the cake called America, especially the institution of the police. You can’t unbake that cake. Maher contends creating a world without police is not only possible, but necessary.”
—Nick Estes, author of Our History Is the Future

“A World Without Police is provocative in the best possible ways: It dares the reader to imagine a future only without policing, but shorn of the capitalism and white supremacy that refashions a public in the image of the police. It situates the carceral and coercive institutions in the US within broader global currents of imperial violence. And it demands that we together build strong, antiracist, and egalitarian communities that can defend themselves here and across national boundaries.”
—Laleh Khalili, author of Sinews of War and Trade

“Geo rips away the band-aid of liberal police reform to expose the open wound of racism, colonialism, and economic exploitation at the heart of capitalism and its police and shows us that healing that wound will require deep global transformations rooted in community empowerment.”
—Alex Vitale, author of End of Policing

“Stunning in conception. Forceful in argument. Expert in proposing remedies. In sum, this is a book that must not only be read—but studied.”
—Gerald Horne, author of Fire This Time

“No reasonable person can read this book and still believe police are good for us. Geo Maher proves on every single page that ‘A World Without Police’ is no utopia but a concrete necessity if we want to preserve life and make our communities safer. And he shows us precisely how it could be done. Take this book everywhere. Read, share, act; defund, disarm, abolish. ”
—Robin D. G. Kelley, author of Freedom Dreams

“Maher’s prose, trenchant and unapologetic, helps us write a poetry of abolition.”
—Tyler Wall, author of Police: A Field Guide

“A thesis sure to stir plenty of controversy but worthy of discussion.”
—Kirkus Reviews

“A clear-sighted and passionate case for abolition that is ultimately an argument for changing the world as we know it. Maher’s work is steeped in historical understanding and revolutionary insight, but it is, above all, determinedly hopeful and humane in its vision of another way of living together that is absolutely possible.”
—Priyamvada Gopal, author of Insurgent Empire

“Thanks to the tireless organizing work of the ‘stubborn agitators, zealots, and fanatics of the best sort’ who inspire Geo Maher, police abolition is an increasingly widespread political demand. A World Without Police dismantles every argument cops and their supporters offer to defend our present world with police, incisively detailing their flaws and falsehoods. In our future world without police, Maher’s persuasive book will serve as the institution’s autopsy report.”
—Stuart Schrader, author of Badges Without Borders

“Geo Maher not only demonstrates definitively that police serve a wealthy white elite and don’t protect us, but also illuminates the path toward abolishing policing. By describing concrete local and global experiments in grassroots resistance, he brings clarity to how community organizing works tactically and politically to make policing obsolete. A World without Police offers inspiring assurance that we can achieve the vision embodied in its title.”
—Dorothy Roberts, author, Killing the Black Body and Shattered Bonds

“In A World Without Police, Geo Maher considers modern day abolitionist movements against policing. Through the flames of the 2020 uprisings, he illuminates a long history of abolitionist struggles for freedom, for democracy, and for the radical transformation of the world. An urgent text for our times. ”
—Christina Heatherton, editor of Policing the Planet

“A World without Police analyzes the unfinished business of ‘abolition democracy’ in the twenty-first century. Amidst a cycle of rebellion, Geo Maher deftly illuminates how policing is a ‘racket.’ The power to transform society, he argues, lies in the visions of radical democratic movements to abolish the police. ”
—Jordan Camp, author of Incarcerating the Crisis

“What is the ‘thin blue line’ if not a border, writes Geo Maher in his terrific new book A World Without Police. In nine beautifully written chapters, he takes us on a terrifying tour of that border, reminding us that cops have never engaged in law enforcement, crime fighting, or public safety. The claim by cops and police reformists that policing secures democracy and civilization against savagery and barbarism is a cruel lie that hides a sadistic police history of white supremacist violence against the poor. We’ll never be free as long as cops patrol our streets, and Geo Maher’s book helps light our way in our struggle to build a world free from the plague of police.”
—David Correia, author of Police: A Field Guide

“An essential introduction to the case for abolishing the police.”
—Publishers Weekly

“In A World Without Police, [Maher] advocates for police abolition alongside community safety.”
—Lit Hub (“75 Nonfiction Books You Should Read This Summer”)

“[A World Without Police] is nothing if not exhaustive. From transit police to the police unions under the Fraternal Order of the Police to a complicit Black elite, Maher implicates the police and its allies in the history of American violence writ large.”
—Kamil Ahsan, NPR Books

“Both one of the most compelling arguments for police abolition and a complete depiction of the nationwide George Floyd uprisings to date … Sure to be a key abolitionist text for activists and organizers.”
—Christian Noakes, Workers World

“A World Without Police lays out a withering takedown of the institution of policing with fiery vim and audacious aplomb. A searing and incisively argued indictment of the edifice of policing and an argument for abolition.”
—Brian Bean, Rampant