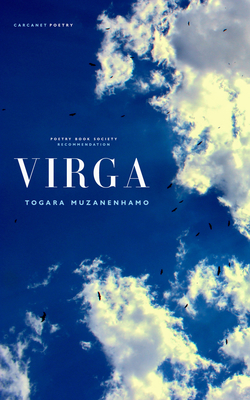 By Togara Muzanenhamo
$14.99
Unavailable, Out of Stock, or Out of Print

A Poetry Book Society Autumn 2021 Recommendation. Virga is the third book of poems by Zimbabwean poet Togara Muzanenhamo, following on from his acclaimed collections Spirit Brides (2006) and Gumiguru (2014). Set in the twentieth century, Virga features historical events woven together by the weather. From the spiritual silence of a sundog during the 1911 Japanese Antarctic Expedition, to the 1921 World Championship chess matches in the Cuban heat, to the final hours of a young Bavarian mountaineer in the Bernese Alps in 1936, and strange white clouds decimating whole villages in northern Cameroon in 1986—the poems capture stories of a rapidly evolving century beneath an ancient, fragile sky. The title relates to the meteorological phenomenon in which a column, shaft, or band of rain or snow is seen falling from a cloud but never reaching the earth— evaporating before touchdown. Like Gumiguru, which has so much to do with weather, Virga continues with it, its impact on our daily lives. But, here, his geography broadens out to include wider worlds and different histories artfully strung together by the poet's fascination with the elements.

Togara Muzanenhamo was born to Zimbabwean parents in Lusaka, Zambia, in 1975. He was brought up in Zimbabwe, and then went on to study in The Hague and Paris. His work has appeared in magazines in Europe, South Africa, the United States, and Zimbabwe, and was included in Carcanet's anthology New Poetries in 2002. He lives with his partner and children in Harare.

'Muzanenhamo has a rare gift and should be admired for the risks he takes, which have enabled him to write unusual, moving and yet understated poems about conflict, love and work.'—Times Literary Supplement