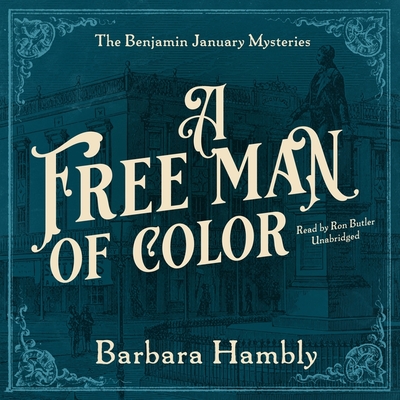 By Barbara Hambly, Ron Butler (Read by)
$34.95
Unavailable, Out of Stock, or Out of Print

This lush and haunting novel tells of a city steeped in decadent pleasures and of a man, proud and defiant, caught in a web of murder and betrayal.

It is 1833. In the midst of Mardi Gras, Benjamin January, a Creole physician and music teacher, is playing piano at the Salle d'Orl ans when the evening's festivities are interrupted--by murder.

The ravishing Angelique Crozat, a notorious octoroon who travels in the city's finest company, has been strangled to death. With the authorities reluctant to become involved, Ben begins his own inquiry, which will take him through the seamy haunts of riverboatmen and into the huts of voodoo worshipping slaves.

But soon the eyes of suspicion turn toward Ben--for, black as the slave who fathered him, this free man of color is still seen as the perfect scapegoat.