Everything Is Fine: A Memoir (Compact Disc) 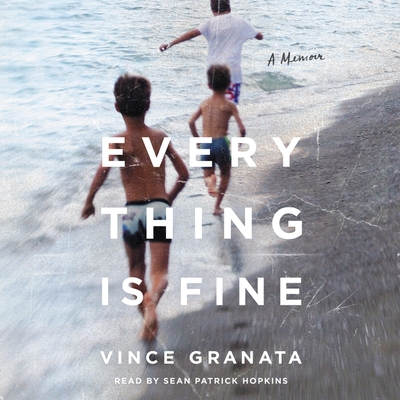 By Vince Granata, Sean Patrick Hopkins (Read by)
$39.99
Unavailable, Out of Stock, or Out of Print

In this extraordinarily moving memoir about grief, mental illness, and the bonds of family, a writer delves into the tragedy of his mother's violent death at the hands of his brother who struggled with schizophrenia. Perfect for fans of An Unquiet Mind and The Bright Hour. Vince Granata remembers standing in front of his suburban home in Connecticut the day his mother and father returned from the hospital with his three new siblings in tow. He had just finished scrawling their names in orange chalk on the driveway: Christopher, Timothy, and Elizabeth. Twenty-three years later, Vince was a thousand miles away when he received the news that would change his life--his younger brother, Tim, propelled by unchecked schizophrenia, had killed their mother in their childhood home. Devastated by the grief of losing his mother, Vince is also consumed by an act so incomprehensible that it overshadows every happy memory of life growing up in his seemingly idyllic middle-class family. In this vibrant combination of personal memoir and journalism, Vince examines the disease that irrevocably changed his family's destiny. As he painstakingly pieces together Tim's story, Vince begins the process of recovering the image of his remarkable mother and salvaging his love for his brother. Written in stark, precise, and beautiful prose, Everything Is Fine is a powerful and reaffirming portrait of loss and forgiveness.