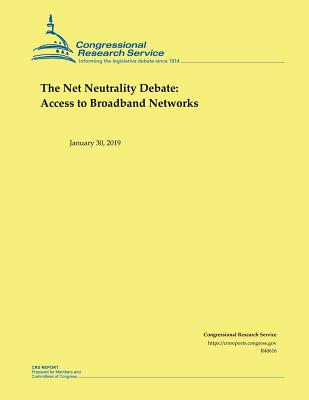 By Congressional Research Service
$9.95
Unavailable, Out of Stock, or Out of Print

As congressional policymakers continue to debate telecommunications reform, a major discussion point revolves around what approach should be taken to ensure unfettered access to the internet. The move to place restrictions on the owners of the networks that compose and provide access to the internet, to ensure equal access and nondiscriminatory treatment, is referred to as "net neutrality." There is no single accepted definition of "net neutrality," but most agree that any such definition should include the general principles that owners of the networks that compose and provide access to the internet should not control how consumers lawfully use that network, and they should not be able to discriminate against content provider access to that network. The Federal Communications Commission (FCC) in its February 26, 2015, open meeting voted 3-2, along party lines, to adopt open internet rules and released these rules on March 12, 2015. One of the most controversial aspects of the rules was the decision to reclassify broadband internet access service as telecommunications service under Title II, thereby subjecting internet service providers to a more stringent regulatory framework. With limited exceptions, the rules went into effect June 12, 2015. Various parties challenged the legality of the FCC's 2015 Open Internet Order, but the U.S. Court of Appeals for the D.C. Circuit, in a June 14, 2016, ruling, voted (2-1) to uphold the legality of all aspects of the 2015 FCC Order. A petition for full U.S. Appeals Court review was denied and a subsequent petition for U.S. Supreme Court review was declined. The FCC on December 14, 2017, adopted (3-2) an Order that largely reverses the 2015 regulatory framework. The 2017 Order, among other things, reverses the 2015 classification of broadband internet access services as a telecommunications service under Title II of the Communications Act, shifts much of the oversight from the FCC to the Federal Trade Commission and the Department of Justice, and provides for a less regulatory approach. This action has once again opened up the debate over what the appropriate framework is to ensure an open internet. Reaction to the 2017 Order has been mixed. Some see the 2015 FCC rules as regulatory overreach and welcome a more "light-touch" approach, which they feel will stimulate broadband investment, deployment, and innovation. Others support the 2015 regulations and feel that their reversal will result in a concentration of power to the detriment of content, services, and applications providers, as well as consumers, and refute the claim that these regulations have had a negative impact on broadband investment, expansion, or innovation. The 2017 Order was published in the Federal Register on February 22, 2018, and went into effect on June 11, 2018. Federal Register publication triggered timelines for both court challenges and Congressional Review Act (CRA) consideration. Petitions for review have been consolidated in the U.S. Court of Appeals, D.C. Circuit. CRA resolutions (S.J.Res. 52, H.J.Res. 129) to overturn the 2017 Order, were introduced in the 115th Congress. S.J.Res. 52 passed (52-47) the Senate, but H.J.Res. 129 was not considered in the House. The FCC's move to adopt the 2017 Order has reopened the debate over whether Congress should consider a measure to amend existing law to provide greater regulatory stability and guidance to the FCC regarding broadband access. Four bills (H.R. 4682, H.R. 6393, S. 2510, and S. 2853) to provide a regulatory framework to outline FCC authority over broadband internet access services were introduced, but not acted on, in the 115th Congress. Debate over what the appropriate regulatory framework should be for broadband access is expected to continue in the 116th Congress.