King of Pawns: A Deadly Game Of Espionage Chess (Paperback) 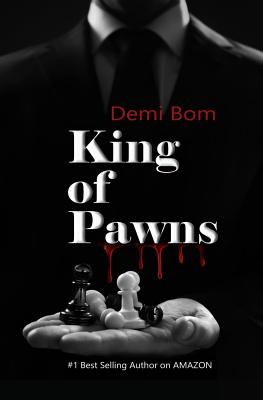 For some time, the CIA has been operating under old assumptions that men are superior beings in the spy world. That era is over. The new CIA culture is adapting to a world where the most powerful piece on the chessboard is a woman.THE QUEEN.
After years of grooming a foreign agent to become Prime Minister, the CIA finds out its mission is about to be blown by Alexander Orlovsky, the son of an elite KGB officer with the mind of a chess master, the skills of a commando, and the looks of a playboy. The CIA makes the problematic decision to send Slavena Ivanova, a junior intelligence officer, back to her country of birth to counter Orlovsky. She is not experienced for such a cutthroat operation, but understands the psychology of men. By studying everything about her opponent, Slavena taps into Orlovsky's mind and his erroneous assumptions that women are just pawns to be used to fulfill men's needs. She uses her expertise in the art of manipulation to successfully derail Orlovsky from killing the prospective Prime Minister until he uncovers the truth: that Slavena is not a pawn, but a queen sent by the CIA to checkmate him.
A page-turning dark novel, King of Pawns is inspired by the true story of a wave of murders of prominent mafia bosses that swept East Europe. Demi Bom recasts a series of cold-blooded murder cases into a dark romance between a lonely spy and a lonely killer. The story of a young woman, who escapes her past only to be thrown back into it. After the rape and murder of her sister by the mafia, young Slavena immigrates to the US and washes ashore at the CIA. Recruited for her creative mind and high tolerance for risk, the CIA sends her back home to play a deadly game of chess with an experienced, ice-cold assassin, and narcissistic psychopath, Alexander Orlovsky. She uses tradecraft to serve the interest of her nation. He uses tradecraft for the thrill of killing. King of Pawns is the clash of two fearless souls whose only fear is being defeated in this deadly game of chess.
King of Pawns is the first in a series of suspenseful spy thrillers with a distinctly dark edge, featuring chess games as intense depictions of sex, espionage, human relationships, the corrupt nature of politics, and psychological analysis. Demi Bom takes readers on the dangerous ride of a pawn crossing the board in hopes of being promoted into a queen.
If you're a fan of Adam Hall's Quiller, Barry Eisler's Killer Collective, Robert Little Company, Tom Clancy's Jack Ryan, Ken Follett's Eye of the Needle, Robert Ludlum's Bourne, Frederick Forsyth's Jackal or other great authors like Eric Ambler, John le Carr , Daniel Silva, Jason Matthews, the King of Pawns spy fiction series is sure to satisfy your urge for an excellent, page-turning read.