The Report on Unidentified Flying Objects: Project Blue Book - The Complete 1956 Report on UFOs by an Officer of the U.S. Air Force (Paperback) 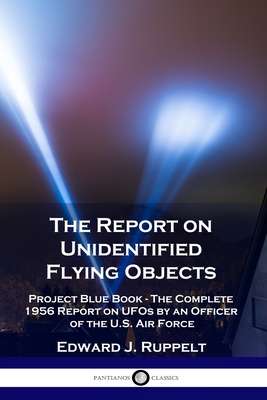 By Edward J. Ruppelt
This Book Is Not Sold Online - Inquire In Store

Project Blue Book was a U.S. government investigation of Unidentified Flying Objects - UFOs. One of the men working on the project was decorated U.S. Air Force officer Edward Ruppelt, and this book contains the findings.

The ideas surrounding UFOs were stoked by popular imagination; flying saucers, alien visitation or even abduction, and strange phenomena such as lights or aircraft moving rapidly in the sky. Following World War II, the idea that aliens were regularly appearing in spacecraft, coupled with abundant reports of unexplained objects in the sky, prompted a series of investigations by governments. Project Blue Book was among the most notable, led by Josef Allen Hynek and staffed by officers such as Edward Ruppelt - both of whom were open-minded when identifying these unusual phenomena.

Ruppelt's explanations are thorough, explaining what he and his team uncovered in detail over the course of 1952-1954. Finding nothing conclusive in support of UFOs as alien spacecraft, he quotes fellow officer Andy Flues:

"Even taking into consideration the highly qualified backgrounds of some of the people who made sightings, there was not one single case which, upon the closest analysis, could not be logically explained in terms of some common object or phenomenon."