Enchiridion: A Manual for the Stoic Life (Hardcover) 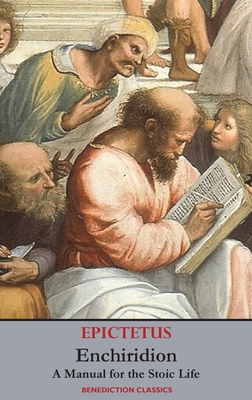 "First say to yourself what you would be; and then do what you have to do." ― Epictetus

"I laugh at those who think they can damage me. They do not know who I am, they do not know what I think, they cannot even touch the things which are really mine and with which I live." ― Epictetus

"No man is free who is not master of himself." ― Epictetus

Epictetus'Enchiridion (or Manual) was compiled by his pupil Arrian and is intended as a "manual for life", and as such it eschews metaphysics and focus on the practical. It has been one of the most widely read philosophical texts until the 17th century, and has had a place in many libraries, including those of John Harvard and Thomas Jefferson. In a later Christianized form it was used in many monastic orders. The Enchiridion is perhaps the shortest introduction to Stoicism.

Epictetus' works have since antiquity been among the most influential Stoic texts. His ideas are surprisingly fresh: practical and speaking eloquently to the modern reader. A starting point of his philosophy is an understanding of that which is, and that which is not, under our control. However, Epictetus does not advocate a passive acceptance of fate, but advises clear-sightedness and purpose to guide us through life and its inevitable reverses.

Like Socrates, Epictetus wrote nothing. His informal lectures were transcribed by his pupil Arrian. Within fifty years they were widely read, including by the philosopher Emperor Marcus Aurelius.

George Long has also translated The Discourses of Epictetus, The Mediations of Marcus Aurelius and Plutarch's Lives, and written Decline of the Roman Empire.

Epictetus (c.a. CE 5 - CE 135) was born a slave in present day Turkey in the Roman Empire. However, his master allowed him to study Stoic Philosophy, and he became one of the most respected philosophers of his time, being widely read and quoted by subsequent Stoics. He was a powerful speaker who could induce any emotion he wanted in his listener, and many eminent figures, including the Emperor Hadrian, sought his conversation. Despite lameness and persistent ill health, but perhaps due to his simple lifestyle and philosophy, he lived to an age of about 80 which was remarkable at the time.