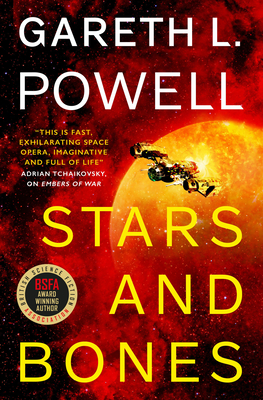 Seventy-five years from today, the human race has been cast from a dying Earth to wander the stars in a vast fleet of arks—each shaped by its inhabitants into a diverse and fascinating new environment, with its own rules and eccentricities.

When her sister disappears while responding to a mysterious alien distress call, Eryn insists on being part of the crew sent to look for her. What she discovers on Candidate-623 is both terrifying and deadly. When the threat follows her back to the fleet and people start dying, she is tasked with seeking out a legendary recluse who may just hold the key to humanity’s survival.

Gareth L. Powell was born and raised in Bristol, where he still lives, and his early mentors included Diana Wynne Jones and Helen Dunmore. His novels have twice won the BSFA Award, and been finalists for both the Locus Award in the US and the Seiun Award in Japan. He is probably best known for his acclaimed Embers of War space opera series, which includes the novels Embers of War, Fleet of Knives, and Light of Impossible Stars. He is a popular guest and speaker at conventions and literary events, and can often be found on Twitter @garethlpowell giving free advice to aspiring authors.

Praise for Stars and Bones:

"With a strong heroine, some really imaginative supporting characters (including a talking cat), and a story that packs a serious emotional wallop, the novel spotlights Powell’s gifts for character-building and plotting. He’s already won two best-novel awards from the British Science Fiction Association, and it wouldn’t be surprising to see this one getting a nomination, too." - Booklist

"Gareth Powell drops you into the action from the first page and then Just. Keeps. Going. This is a pro at the top of his game."
John Scalzi

"A gripping, fast-paced space opera that poses the unique question: what if instead of saving humanity, aliens decided to save the Earth?"
Stina Leicht, author of Persephone Station

"An interstellar intelligence has a plan for Earth’s future, but is humanity a part of it? Fast-paced and thoughtful, Stars and Bones leaves the reader well-fed with hearty helpings of mystery, suspense, adventure, and terror."
Marina Lostetter, author of Noumenon

"Gareth Powell’s Stars and Bones is shocking and beautiful—an electric, epic, and sometimes gruesome look at humanity facing its biggest challenge yet. Powell keeps the pressure on and doesn’t let go. I enjoyed it immensely."
Karen Osborne, author of Architects of Memory

"A vividly imagined, propulsive read. Filled with a loveable cast of characters. Powell’s writing creates a rich tapestry of their voices and inner lives. I think readers will be thrilled by this story."
Temi Oh, author of Do You Dream of Terra-Two?

"Big ships, big ideas and big emotions. Thrilling space opera which is epic in scope, yet always rooted at the human level, as all the best sci-fi is."
Emma Newman, author of Planetfall

"An interstellar collision of massive ideas and startling originality."
Zack Jordan, author of The Last Human