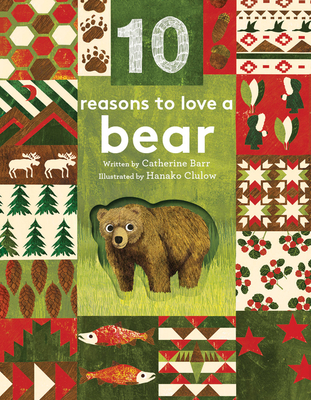 By Catherine Barr, Natural History Museum, Hanako Clulow (Illustrator)
This Book Is Not Sold Online - Inquire In Store
Out of Print

Bears are incredible creatures! Did you know that they can sleep for months on end? Or that they hum when they are happy?  Discover ten reasons why bears are amazing and five ways you can show they love them in this gorgeous picture book. A must for any young animal enthusiast and a fantastic introduction to environmental issues.

Catherine Barr worked at Greenpeace International for seven years as a wildlife and forestry campaigner and has a long-running interest in environmental issues. While working as an editor at the Natural History Museum, she researched and wrote two major summer exhibitions: Dinosaurs of the Gobi Desert and Myths and Monsters. She lives on a hill near Hay-on-Wye in Herefordshire with her partner and two daughters.

Hanako Clulow left Japan in 1997 for Ireland, where she studied visual arts and English. She then headed to England to explore her passion for child psychology, obtaining a BSc in psychology from the University of London in 2007. While she was deeply fascinated by child psychology, her passion for the arts re-emerged, which led her to pursue life as an illustrator. Her work draws upon a broad range of interests such as nature, the animal kingdom, psychology, fantasy, and her native culture.