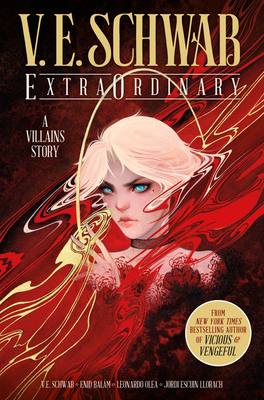 #1 New York Times bestselling author of The Invisible Life of Addie LaRue, launches her incredible world of super beings with this ALL-NEW dazzlingly illustrated graphic novel set in the five years between Vicious and Vengeful. A must for all Schwab fans everywhere!


This collection also features, for the first time ever in print, Schwab’s original 2013 text short story Warm Up, which is set in the Vicious universe.

Taking place in the years between VICIOUS and VENGEFUL, ExtraOrdinary follows the tale of a teenage girl named Charlotte Tills who following a fatal bus crash, seemingly dies only to wake up to discover she has become an EO — a person with ExtraOrdinary abilities. In Charlotte’s case, it’s the ability to see people's deaths, but when she looks into her own future, sees her own murder at the hands of the self-proclaimed hero and notorious EO killer Eli Ever, who is currently in prison for the murder of Victor Vale. Refusing to accept her fate, Charlotte sets off to find--and change--her future--before it comes for her.

This graphic novel introduces Eli Ever, the antagonist at the heart of the Villains series.

Also includes for the first time ever in print, V.E. Schwab’s original text short story, Warm Up. Set in the Vicious universe and follows the story of a family man called David, who after surviving a deadly avalanche wakes up as an EO with the terrifying ability to create fire with his mind.

V. E. Schwab's first adult novel, Vicious, debuted to critical praise and reader accolades. She is the author of the NYT bestselling Shades of Magic series, as well as a number of MG and YA novels, including This Savage Song. She has been called "the heir to Diana Wynne Jones." Her dynamic work has caught the attention of major TV and film studios.

Schwab has a Masters degree in Art History from the University of Edinburgh. She currently lives in Nashville, TN, but frequents Edinburgh. Entertainment Weekly's 27 Female Authors Who Rule Sci-Fi and Fantasy Right Now.

Enid Balam began his career in 2015 as a colourist working for Delcourt, before finding work as a penciler and inker working for the likes of Humanoid, and Sergio Bonelli. His first graphic novel, Someday Comes Paradise was published in 2018.

“There is no shortage of gruesome ways that heroes and villains have gained superpowers throughout the history of DC and Marvel, but Titan Comics just revealed a new way that’s pretty darn twisted in V.E. Schwab’s ExtraOrdinary.” - Times News Express

"Fans of superhero comics will be gratified to find a lot of the hallmarks of the genre here—quippy dialogue, cinematic action, secret identities, and twisted motivations." - Booklist

"A welcome addition to the Vicious universe, and Schwab continues to impress with the amount of depth she gives to her characters." - Library Journal