Everybody Dance: Chic and the Politics of Disco (Paperback) 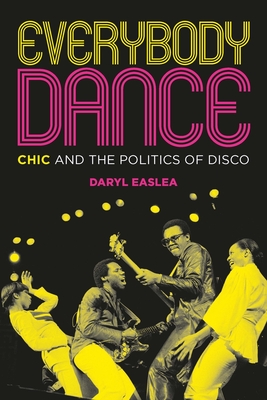 By Daryl Easlea
$26.99
Unavailable, Out of Stock, or Out of Print

Few narratives in pop encompass Jimi Hendrix, David Bowie, Roxy Music, Madonna, Duran Duran, Diana Ross, Johnny Mathis and Led Zeppelin. This story is one of them. Chic, led by former Black Panther activist Nile Rodgers and down-home family man Bernard Edwards, are one of the most underrated and pivotal acts in African-American musical history. As artists, they created a discrete R&B sound that just happened to coincide with the disco movement. At the height of their fame, they either released or produced a string of era-defining records but when disco collapsed, so did Chic’s popularity. The group quietly called it a day in 1983. However, Rodgers and Edwards individually produced some of the great pop-dance records of the 80s, working with David Bowie, Robert Palmer, Madonna, Duran Duran and ABC, among many others. Everybody Dance puts the rise and fall of Bernard Edwards and Nile Rodgers, the emblematic disco duo behind era-defining records "Le Freak," "Good Times," and "Lost In Music," at the heart of a changing landscape, taking in sociopolitical and cultural events such as the Civil Rights struggle, the Black Panthers, and the U.S. oil crisis. There are drugs, bankruptcy, uptight artists, fights, and Muppets but, most importantly, an in-depth appraisal of a group whose legacy remains hugely underrated.

Daryl Easlea was in music retail between 1979 and 1997, and left to belatedly take his degree in American History and International History at Keele, where he also ran the student radio station. He began writing professionally in 1999. After graduating in 2000, he became the deputy editor at Record Collector, where he remains a regular contributor. His work has also appeared in Mojo, Mojo Collections, various Q and Mojo specials, Prog Magazine, The Guardian, Uncut, Dazed & Confused, The Independent, Socialism, The Glasgow Herald, The Encyclopedia of Popular Music, 1001 Albums You Must Hear Before You Die and bbc.co.uk.