The Extreme Centre: A Warning (Paperback) 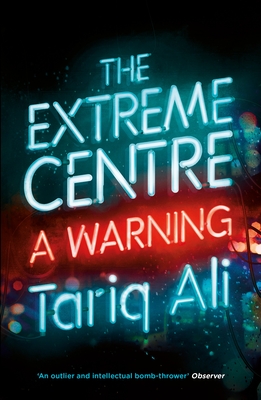 Britain’s leading radical delivers an eviscerating attack on the indistinguishable political elite of the UK.

What is the point of elections? The result is always the same: a victory for the Extreme Centre. Since 1989, politics has become a contest to see who can best serve the needs of the market, a competition now fringed by unstable populist movements. The same catastrophe has taken place in the US, Britain, Continental Europe and Australia.

In this urgent and wide-ranging case for the prosecution, Tariq Ali looks at the people and the events that have informed this moment of political suicide: corruption in Westminster; the failures of the EU and NATO; the soft power of the American Empire that dominates the world stage uncontested.

Despite this inertia, Ali goes in search of alternative futures, finding promise in the Bolivarian revolutions of Latin America and at the edges of Europe. Emerging parties in Scotland, Greece and Spain, formed out of the 2008 crisis, are offering new hope for democracy.

Tariq Ali is a writer and filmmaker. He has written more than a dozen books on world history and politics—including Pirates of the Caribbean, Bush in Babylon, The Clash of Fundamentalisms and The Obama Syndrome—as well as five novels in his Islam Quintet series and scripts for the stage and screen. He is an editor of the New Left Review and lives in London.

“Ali is indeed a kind of professional, or inveterate heretic, a writer who has made a career of dissenting from every kind of orthodoxy.”
—Robyn Creswell, The National

“Ali remains an outlier and intellectual bomb-thrower; an urbane, Oxford-educated polemicist.”
—The Observer

“For years, left-wing critics have framed the debate. Angela Davis, Ruthie Gilmore, Marc Mauer and, more recently, Michelle Alexander gave us the terminology to speak about all this: the prison industrial complex, abolition, non-reform reform and The New Jim Crow … [Ali’s theorized term ‘extreme center’] provides us with a new language to describe our problems…[O]ne of the key tasks of the extreme center is to take center stage, to ensure that no alternative seems either reasonable or possible.”
—James Kilgore, author of Understanding Mass Incarceration: A People’s Guide to the Key Civil Rights Struggle of our Era, in CounterPunch