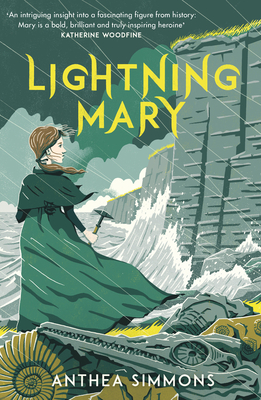 Ordinary is what most people are and I am not. I am not ordinary at all. I am a scientist.

One stormy night, a group of villagers are struck by lightning. The only survivor is a baby—Mary Anning. From that moment on, a spark is lit within her.
Growing up poor but proud on the windswept Dorset coast, Mary follows after her father, hunting for fossils uncovered by waves and landslips: ancient creatures, turned to stone. Ignoring other people's taunts, Mary faces danger to bring back valuable treasures to help feed her family. But tragedy and despair is never far away. Mary must depend upon her unique courage and knowledge to fulfill her dream of becoming a scientist in a time when girls have no opportunities for such ambitions. What will happen when she makes her greatest discovery of all? With a factual section about Mary Anning, her life, and the discoveries she made.

Anthea Simmons had a successful career in the City and a spell of teaching before becoming a writer. She is the author of Share, The Best Best Baby, and I’m Big Now.

Mary Anning (1799-1847) was an English fossil collector, dealer, and paleontologist who became internationally known for important finds she made in Jurassic marine fossil beds in the cliffs along the English Channel in Lyme Regis, Dorset county. Her discoveries became key pieces of evidence for extinction.

She became well known in geological circles in Britain, Europe and US, but as a woman, was not allowed to join the Geological Society of London or even attend meetings as a guest, and did not always receive full credit for her scientific contributions. After her death, the president of the Geological Society wrote a eulogy that he read to a meeting of the society and published, the first such eulogy given for a woman. Charles Dickens wrote an article about her life in his literary magazine in Feb 1865.

In 1999, on the 200th anniversary of her birth, an international meeting of historians, scientists, and others interested in her life was held in Lyme Regis.

In 2010, 163 year after her death, the Royal Society included Anning in a list of the 10 British women who have most influenced the history of science.

In 2009, Tracy Chevalier wrote Remarkable Creature, a historical novel in which Anning and Elizabeth Philpot were main characters. Another historical novel novel about Anning, Curiosity by Joan Thomas, was published in 2010.

In 2018 it was announced that Kate Winslet and Saoirse Ronan would star in an upcoming film directed by Francis Lee (God's Own Country) entitled Ammonite, based on Anning's life and legacy, and with a lesbian romance plot. Principal photography began in March 2019 in Dorset. In January 2020, Neon (Parasite, Portrait of a Lady on Fire, Monos, Border, Honey Land) acquired US distribution rights. Due to be released in 2020.

"Anthea Simmons tells Mary’s story as an exciting adventure and also as a rousing story of what an intelligent and brave woman can do." —LoveReading4Kids

"An intriguing insight into a fascinating figure from history: Mary is a bold, brilliant and truly inspiring heroine." —Katherine Woodfine

"Mary is a fascinating character and in Simmons’ hands, she rips up the page with her determination and strength." —Irish Independent

"An inspirational fictional account of a bold heroine, this also includes a factual section to inspire budding scientists." —Bookseller

"A treasure of a tale. Lightning Mary is as fiery and bright as the lightning bolt after which her father names her. Anthea Simmons has gifted her heroine with a voice as fierce and rare as the strange creatures she excavates. Mary’s determination to follow her dream of becoming a scientist against the odds stacked against her at the time of being born both poor and a girl, can’t fail but to inspire young readers." —Ally Sherrick

"Mary’s story brings out your sense of excitement, adventure and curiosity! A good read for anyone interested in the history of an amazing woman and the birth of palaeontology." —Charmouth Heritage Coast Centre

“Fascinating portrait of a great role model for adventurous youth who are interested in science.” —Kirkus Reviews