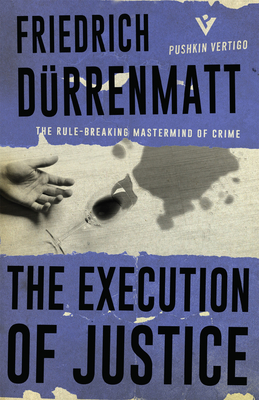 By Friedrich Duerrenmatt, John E. Woods (Translated by)
This Book Is Not Sold Online - Inquire In Store
Not In Stock/Special Order

A respected professor is dead—shot in a crowded Zurich restaurant, in front of dozens of witnesses. The murderer calmly turned himself in to the police. So why has he now hired a lawyer to clear his name? And why has he chosen the drink-soaked, disreputable Spät to defend him?

As he investigates, Spät finds himself obsessed, drawn ever deeper into a case of baffling complexity until he reaches a deadly conclusion: justice can be restored only by a crime.

The Execution of Justice is a dark, wicked satire on the legal system and a disturbing, if ambivalent, allegory on guilt, justice, violence and morality.

Friedrich Dürrenmatt (1921-1990) was a Swiss author and dramatist, most famous for his plays The Visit and The Physicists. He is revered as one of the greatest playwrights in the German language. He also wrote a number of crime novels, including The Execution of Justice, which was published to great acclaim in 1985.

"It's not that Dürrenmatt always took the road less chosen, more that he carved out an entirely different and perverse path through the literary undergrowth" — Crime Time

"A dark, wicked satire on the legal system and a disturbing, if ambivalent, allegory on guilt, justice, violence and morality" — Publishers Weekly

"Audacious... Durrenmatt's compelling handling of his favorite themes... makes Spat's funny, sad nightmare less like The Murder of Roger Ackroyd than like The Fall or The Crying of Lot 49" — Kirkus Reviews