Freedom and the Subject of Theory: Essays in Honour of Christina Howells (Paperback) 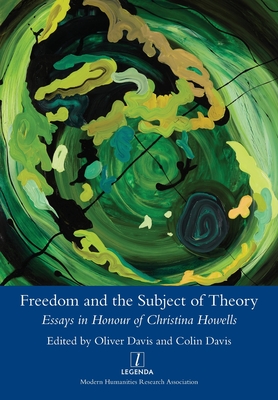 Are our actions and values freely chosen, or imposed on us by a complex interplay of unconscious motivations, culture, history, institutions and the pressure of others? Is the human subject a self-defining, self-creating autonomous agent, or merely the product or plaything of forces beyond its control? Are other people allies in the project to realize freedom, or unmovable obstacles who stand in our way? If we knew how to embrace freedom, would it be a blessing or a curse, a joyous epiphany or a crushing burden? To what extent does our finite mortal existence condition and limit our freedom? The work of Christina Howells has been instrumental in demonstrating how Continental thought has explored these questions in ways which are intellectually rigorous and humanly compelling. In this volume, some of her colleagues and former students build upon her work by addressing the situation of 'theory' today - literary, political, psychoanalytic, aesthetic and philosophical - in its relation to freedom and subjectivity. The volume includes a number of new essays on each of Jean-Paul Sartre (1905-1980), Frantz Fanon (1925-1961), Jacques Derrida (1930-2004) and Jean-Luc Nancy (b. 1940), as well as essays on a range of other theorists. Taken together, the volume's essays show how the modern theorising subject may be both the source and the product of its endeavour to understand its place in the human, mortal world.