Vast Expanses: A History of the Oceans (Hardcover) 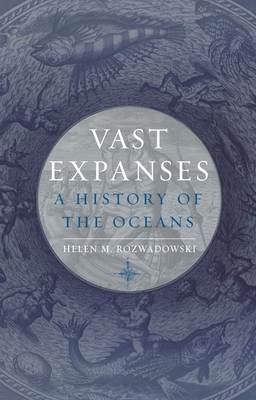 By Helen M. Rozwadowski
$25.00
Unavailable, Out of Stock, or Out of Print

Much of human experience can be distilled to saltwater: tears, sweat, and an enduring connection to the sea. In Vast Expanses, Helen M. Rozwadowski weaves a cultural, environmental, and geopolitical history of that relationship, a journey of tides and titanic forces reaching around the globe and across geological and evolutionary time.

Our ancient connections with the sea have developed and multiplied through industrialization and globalization, a trajectory that runs counter to Western depictions of the ocean as a place remote from and immune to human influence. Rozwadowski argues that knowledge about the oceans—created through work and play, scientific investigation, and also through human ambitions for profiting from the sea—has played a central role in defining our relationship with this vast, trackless, and opaque place. It has helped us to exploit marine resources, control ocean space, extend imperial or national power, and attempt to refashion the sea into a more tractable arena for human activity.

But while deepening knowledge of the ocean has animated and strengthened connections between people and the world’s seas, to understand this history we must address questions of how, by whom, and why knowledge of the ocean was created and used—and how we create and use this knowledge today. Only then can we can forge a healthier relationship with our future sea.

Founder of the University of Connecticut’s Maritime Studies Program, Helen M. Rozwadowski teaches history of science, environmental history, and public history as well as interdisciplinary and experiential maritime-related courses. She is the author of Fathoming the Ocean: The Discovery and Exploration of the Deep Sea and coeditor of Soundings and Crossings: Doing Science at Sea 1800–1970.

"Rozwadowski presents a timely and useful oceancentric natural history of the ocean-human relationship. Human understanding of the oceans, which cover much of the surface of the earth, is historically weak. Rarely curious about the waters from which life on earth rose, humans have long exploited the seas for food, transport, mining, recreation, and war. Until recently, it was assumed that ocean resources were inexhaustible, especially the bounty of fish and marine mammals, and that garbage and chemical waste dumped into oceans would just disappear. The idea that burning fossil fuels could raise ocean temperatures was unthinkable. Some forward-thinking individuals recognized warning signs centuries ago, but marine business and industry continued and grew with the exploding world population. Much bad science continued to support uncontrolled exploitation of the seas, even after the rise of the ecological movement of the latter half of the twentieth century. Rozwadowski thoroughly brings readers up-to-date on these essential issues of marine exploration and research and the environment."
— Booklist

"Absorbing and delightfully readable, Vast Expanses explores an immense topic—the history of the world’s oceans—with the skill and intelligence we have come to expect from Rozwadowski’s writings. . . . She crafts a flowing narrative by braiding together three strands of analysis: she demonstrates the interconnectedness of the oceans and human history by examining the enduring human relationship to the sea, spanning back through evolutionary time; she shows that human exchanges with the sea have become increasingly profound over time, especially in the ages of industrialization and globalization; and she reveals that human understandings of the ocean—shaped by science, work, and play—have substantially shaped our interactions with it. . . . Remarkable . . . Through its many interesting facts and details, presented with discernible enthusiasm, Vast Expanses reveals not only Rozwadowski’s considerable ability as a historian but also her love for the ocean. This work will appeal to environmental historians, maritime historians, and any reader who wants to know more about our relationship with the sea."
— H-Environment

"Rozwadowski offers a sweeping account of the ocean's past and a model for an engaged 'ocean history' that places the sea in the heart of our human past. . . . Vast Expanses not only challenges the notion of the ocean as a timeless place immune to human action, but it also situates that conception in the evolution of people’s dynamic relationship with the sea. . . . More significantly, Vast Expanses makes an impassioned, compelling case that a humanistic understanding of the ocean 'can form the foundation for positive change.' . . . This book deserves wide readership."
— Mariner's Mirror

"This engagingly written, meticulously researched, and carefully reasoned examination of the significance of Earth's oceans provides a valuable introduction not only to their geologic past but also to the role humans have played in discovering them, understanding them, and politicizing them. Intimately familiar with every dimension of this topic and the current literature, Rozwadowski places the subject in its appropriate geological, biological, historical, and environmental context. The diverse paths by which the human community began to find its way upon the seas and explore their depths is succinctly delineated. The discovery and exploitation of new lands, in particular the Trans-Mississippi West, is used as a historical counterpoint to examine and challenge many assumptions about the role the seas may play in helping humanity confront the challenges of feeding an ever-increasing global population by depending on its ability to farm the oceans for their (supposedly) inexhaustible marine resources."
— Choice

"[A] masterful new book. . . . The book is well-organized, highly readable, and thoughtfully authoritative, making it equally useful for academic historians interested in her call to take ocean history seriously and for those less expert, including both undergraduates and general readers. . . . Vast Expanses provides a stimulating rethinking of our approach to the oceans and an important addition both to the growing body of scholarship on ocean history and to the broader fields on which it touches."
— Technology and Culture

"No history is ever a complete account; however, this book is a very good introduction to the global histories of the ocean. For all historians, but particularly those of science and technology, it challenges us to think bigger, see globally, and take a plunge into the great beyond of the seascape. It is also an utterly captivating read."
— Isis Journal

"Well written, well researched, covers a huge range of topics, and is full of interesting stuff. . . . For a hardback it represents pretty good value these days."
— Ocean Challenge

"Much of human experience can be distilled to saltwater: tears, sweat, and an enduring connection to the sea. In Vast Expanses, Rozwadowski weaves a cultural, environmental, and geopolitical history of that relationship, a journey of tides and titanic forces reaching around the globe and across geological and evolutionary time."
— New Books Network

"This powerful, progressive text demands that we accord the ocean its history, free from the romantic, anthropomorphic and gendered language of the past, and accept the reality that the human role in the story is one of destruction: without humans the oceans would recover from all the their current problems, reversing centuries of exploitation, pollution, and folly. All of those who go down to the sea in ships, books, or other media will profit from reading Rozwadowski’s timely, concise, and compelling book. . . . Vast Expanses has the capacity to advance understanding, extend engagement, and promote a more sophisticated view of our responsibility for the future of oceans. This is a work of the first importance for students of the sea."
— Andrew Lambert

"Helen M Rozwadowski’s Vast Expanses: A History of the Oceans is a genuine history of the oceans. . . . The author’s genius lies in making the presence of oceans visible and in saying that they have always been around us, influencing our livelihoods and habits of media consumption."

"Vast Expanses is a synthetic book that yokes together research in maritime history, oceanic history, and environmental history, but it is largely based on Rozwadowski’s insightful research on the history of the ocean sciences in the nineteenth century and fisheries management in the twentieth."
— Canadian Journal of History

“Vast Expanses is thought-provoking, intelligent, entertaining, and yet still compact. It could be read in a graduate seminar or on a beach holiday. Rozwadowski has written a great book on an important subject, and it is anything but a dry history!”
— Kurk Dorsey, University of New Hampshire and author of "Whales and Nations: Environmental Diplomacy on the High Seas"