History of the DC Universe (Hardcover) 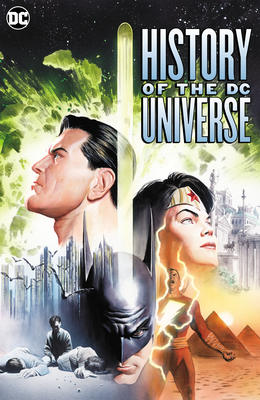 A perfect companion to CRISIS ON INFINITE EARTHS, this is a definitive history of the DC Universe based on the consequences of that epic tale. Narrated by Harbinger, a central figure in the Crisis storyline, the reader is brought through the new history of the world and its heroes. Featuring virtually every character in the DC Universe, including Batman, Superman, Wonder Woman, Aquaman, Green Lantern, and the Flash, this tale takes us from the dawn of creation to the end of recorded history and lays the foundation for adventures to come.Featuring spectacular artwork by George Pérez, illustrator of FINAL CRISIS: LEGION OF THREE WORLDS, this trip through the DC Universe is not to be missed.

In a career that has spanned nearly 30 years, Marv Wolfman has helped shape the heroic careers of DC Comics' Green Lantern, Blackhawk, and the original Teen Titans, as well as Marvel Comics' Fantastic Four, Spider-Man, and Nova. In addition to co-creating The New Teen Titans and the universe-shattering Crisis on Infinite Earths with George Pérez, Wolfman was instrumental in the revamp of Superman after Crisis, the development of The New Teen Titans spin-off series Vigilante, Deathstroke the Terminator, and Team Titans, and created such characters as Blade for Marvel, along with Night Force and the retooled Dial "H" For Hero for DC. In addition to his numerous comic book credits, Wolfman has also written several novels and worked in series television and animation, including the Superman cartoon of the late 1980s and currently the hit Teen Titans show on Cartoon Network.