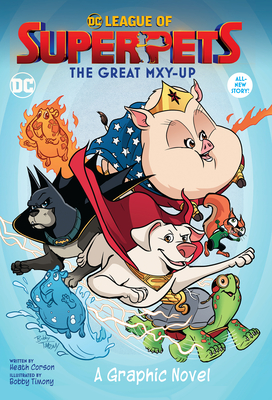 Spinning out from the upcoming WB animated feature, Super Pets: The Great Mxy-Up continues the adventures of characters fans will meet in the film!

There is nothing the Super Pets love more than spending time with their heroes, but they are finding it difficult to be taken seriously as members of the team when their humans just don’t understand them…

When Mr. Mxyzptlk, a magical imp from the fifth dimension, arrives in Metropolis with a plan to wreak a little chaos and destruction, the Justice League is caught in his trap! The Super Pets will need to come up with a plan to prevent Mxy’s mischief from destroying the city—while somehow trying to rescue their human counterparts.

The only problem is, they may need to team up with their greatest enemy to succeed, and they aren’t sure if they can trust her…

Heath Corson is a television writer (TNT's Animal Kingdom), a criminal mastermind, and an animal lover. He likes to think he has a black belt in superheroes since writing the Bizarro miniseries (You am hate it!), Blue Beetle and Booster Gold, Detective Chimp and Nightwing/Magilla Gorilla for DC Comics as well as Justice League: War, Batman: Assault on Arkham, and about a dozen episodes of Justice League Action for Warner Bros. Animation. He would like to thank his rambunctious puppy, Moosie, for inspiring much of Krypto and Ace's behavior.


Bobby Timony and his twin brother Peter created the multiple Harvey Award-nominated paranormal detective web series The Night Owls for DC Comics. Bobby was an artist on The Simpsons, for Bongo Comics, and was a featured artist on The Sequels for Fanbase Press. His original series Goblin Hood is an indie title available on Comixology, and he recently illustrated a set of Disney trading cards for Topps.